May 02, 2010
I'm impressed with Japan's Pavilion at the Shanghai Expo, with the focus on "soft" issues:

...the ideal of "coexistence with nature" that was incorporated into Expo 2005 Aichi Japan, an event that was highly praised as a 21st century expo seeking to resolve global issues. As we do so, we plan to give visitors an opportunity to learn of Japan's true nature and to present a picture of sustainable 21st—century urban living.

The Mainichi has more, quoting experts who

...say Chinese visitors should learn Japan's industry and energy-saving and environment protection technology as China moves closer to becoming a developed country. The Japan Pavilion features a futuristic "zero-emission town," a municipality that emits no carbon dioxide by the year 2020 with the use of 20 types of environmental technology including a power-generating window, whose glass is covered with clear, thin solar cells, and steelmaking with hydrogen, which would reduce CO2 emissions by 30 percent.

On display inside the purple bubble are stuff like a traditional tea house, that looks very inviting. Here are photos and more details about the construction of the pavilion and its environmental considerations. I'm pretty sure I would not like to live in the Zero Emissions Space though! It introduces 20 kinds of environmental technology to realize lower CO2 emissions, for example: 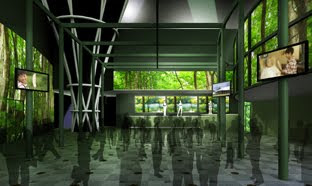 What's missing from this mix? How about bicycles? I would be a lot more impressed if there was a focus on trains and public transportation, rather than cars. This is an area where Japan is a global leader, and China in particular will need to avoid the mistakes of urban areas in other parts of the world, as pedestrians have often been forced away from city centers by cars and roads. How about more information about pollution, such as Japan's experiences with mercury poisoning and scandals and serious environmental issues that led to the more careful approach the country is taking today?

Japan's Pavilion has "a pre-show set against a stunning backdrop of satoyama – cultivated woods and fields in rural Japan" which readers of Kurashi know I like a lot, but I doubt that the Expo visitors get a fair and balanced introduction to the serious challenges for rural areas in Japan, where satoyama landscapes are under threat from urbanization and depopulation. Oh well, at least it is not all violin-playing robots!

More Shanghai Expo on Kurashi: Expo Osaka And Expo Shanghai: 40 Years Later, Have We Learnt Anything?