Expo Osaka And Expo Shanghai: 40 Years Later, Have We Learnt Anything?

March 20, 2010
The theme of Expo 2010 in Shanghai is Better City, Better Life, representing "the common wish of the whole humankind for a better living in future urban environments." Really? I'm sure most of mankind, especially everyone living in rural towns and farm villages, in remote places in mountains or near rivers, lakes and on islands in the ocean, have a very different opinion, but OK. We all hope the city folks will do allright.

It is 40 years since the Osaka Expo in 1970. My aunt's husband is an architect and city planner. As a young lad he and bunch of others flew over to Japan, rented a car, drove on the left side of the road and went to the Osaka Expo. It was a huge inspiration and he has some amazing slides and a lot of stories, that I enjoyed as a child.

Several bloggers have noted the anniversary, including Pink Tentacle:

The 1970 World’s Fair — a.k.a. Expo ‘70 — opened in Osaka 40 years ago this week. A total of 77 countries attended the event and the number of visitors surpassed 64 million people, making it one of the largest and best attended expositions in history. This was the first World’s Fair to be held in Japan, a nation that had experienced an extremely rapid period of development in the 1960s. The theme of the Expo was “Progress and Harmony for Mankind,” and the aim was to showcase the possibilities of modern technology to create a foundation for a high quality of life and peace throughout the world.

Stellavista notes that Osaka marked the "end of the future" as "the planners of Expo 70 had realised that the moon was just a boring, far away rock, which ceased to capture our imagination one year after it was conquered." 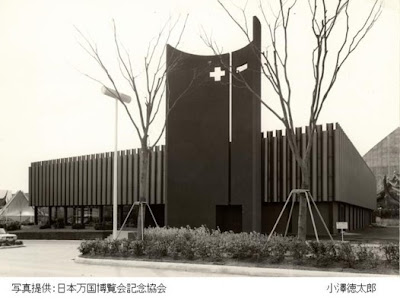 What Sweden and the Scandinavian countries chose to do in Osaka was markedly different. While everyone else tried to outdo each other to brag about their national progress, the Scandinavian Pavilion was adorned with a plus and a minus sign.

The focus was on the environmental disasters, the pollution, and the side effects from rapid economical and scientific change. The displays consisted of some 7200 slides, photographs, panels, and images. Images of destroyed landscapes, drought, desertification, dead fish, dreadful suffering from chemical poisoning...

The theme of the Scandinavian Pavilion was "Protection of the environment in the industrialized society."

In 1970, that was supposed to be a wake up call, an attempt at that rare thing - a voice of reason.

Everyone else seemed to hold on to the belief that earth was infinite, and human skills and engineering wizardy would make our planet a mechanical paradise, if only technology could be utilized on every square inch, for every process, from seed production and concrete pouring to jet travel and the moon landing. The Swedes and the Danes and the others up there in the northern part of Europe were responding to another trend, which has grown much stronger. 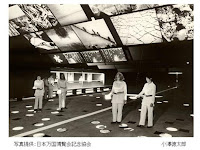 Back in 1970, earth's resources - oil, gas, uranium - would solve all our energy worries.

40 years later, we know we have a lot to learn, as we are running short of all of the above - with a lot more people to feed. But I think we knew that in 1970 too.

Reading about the 2010 Expo in China makes me wonder how we will teach each new generation this important lesson, without making it seem so gloomy and the future so dismal that noone will want to even try to do anything about it... 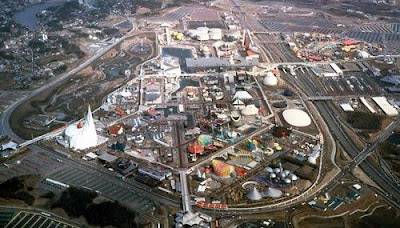 I like how the Osaka Expo site has been turned into a green, lush park. Here are two aerial photos of 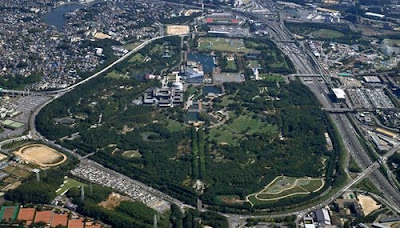 the site, one from 1970 and the last from 1995. That is some progress.
architecture Energy Events progress sustainability

jsung said…
Martin,
I'm doing thesis project at Graduate School of Design at Harvard. And would like to use two images(past and present image of the site). Do you have bigger resolution images that i can get?
Thank you
5:04 am, October 18, 2011

Martin J Frid said…
Jsung, thanks for your comment and best of luck with your thesis project. The images are from the website I linked to, called "Stellavista" and unfortunately there does not seem to be any bigger resolution images.
9:15 pm, October 18, 2011

supremus said…
Martin, I'm looking for a photographs of the scandinavian pavilion in osaka for the book which I'm currently working on. The ones used in your article are just perfect! By any chance do you have better resolution images, or maybe you know how to get them? Thanks in advance for help!
5:04 am, August 06, 2012