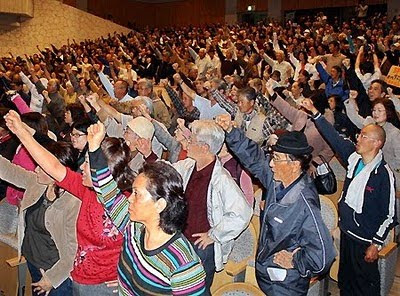 Uruma residents raise their fists during a rally Thursday night (March 25, 2010) against the relocation of US Air Station Futenma to an offshore area of the city. (Photo: Mainichi)

The Mainichi reported that residents of Uruma rallied Thursday against the proposal to build an American military base on an artificial island on their beach:

Residents of this Okinawa Prefecture city have held a rally to express their opposition to a government plan to relocate U.S. Marine Corps Air Station Futenma to an offshore area of the city.

More than 500 people attended the rally held at a hall in Uruma on Thursday night. The gathering was organized by a liaison council of citizens opposing the relocation that was formed by former prefectural assembly members and others...

Mitsue Tomiyama, co-leader of the council, expressed anger at the relocation plan. "How far will the government ridicule local residents?"

The rally attendees adopted a resolution stating that "we are protesting to the government for ridiculing Okinawa. The loss of the sea would lead to the death of Okinawa." They then demanded that the government withdraw the plan to relocate Futenma to an offshore area of the White Beach district of Uruma, and close down Futenma base.

On March 19, the Uruma Municipal Assembly unanimously adopted a resolution opposing the plan while Mayor Toshio Shimabukuro has also voiced opposition to the plan.

On March 26, there was a rare hearing in the US Senate, in Washington DC. 2 peace activists attended. Ann Wright, a Global Article 9 and Network for Okinawa member, & Medea Benjamin of Code Pink holding signs in solidarity with Okinawa and Guam at U.S. Senate March 26, 2010 hearing on the Pacific Command. (Photo: DMZ Hawai'i).

Ten Thousand Things has more photos. Do take a moment and consider the images. Hundreds of people in a small town in Okinawa, Japan, protesting against decisions taken in Washington DC, where the Pentagon and others are making demands that only a handful of people in the US are aware of. And it is not just Uruma, it involves citizens all over Okinawa, in Nago, in Henoko, in Yambara. 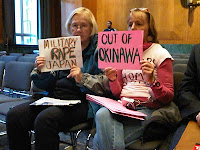