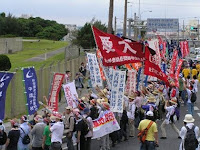 Okinawa, Japan is the hottest story as the Hatoyama government won the election last year promising to change the way the US military bases in the southern prefecture are handled. No more business-as-usual, heavy-handed rule from distant Pentagon, on the south shore of the Potomac river, Washington DC. Far away Tokyo would have some say, but most of all, the new government promised during the election campaign in the summer of 2009 to listen to the people of - Okinawa.

It seems like it took a while for all of this to sink in. It matters a lot to East Asia in general and to the people living next door to Marine helicopter raids and jungle warfare excercises in particular.

It matters a lot to the Okinawan activists who don't want the Americans to turn Henoko into an airfield - not just because of the dugong and the pristine beaches and the blue sea. But because, after 65 years since the end of World War II, these people, living so far from Washington DC or Tokyo have had a glimpse of hope. That's why, today, the prefectural assembly of Okinawa has asked the defense minister to relocate the US Marine Futenma Air Station outside the prefecture or abroad:

The prefectural assembly of Okinawa has asked the defense minister to relocate the US Marine Futenma Air Station outside the prefecture or abroad. Nine assembly members met with Defense Minister Toshimi Kitazawa on Thursday and handed a statement that says the airbase should be transferred out of the prefecture or overseas. The assembly unanimously adopted the statement last month.

Kitazawa said unanimous approval is overwhelming but the issue is still under review and he cannot announce a candidate location at the moment. He also said the Hatoyama administration will examine the issue step by step and hold talks with the people of Okinawa.

Assembly member Yonekichi Shinzato told reporters that the government's review seems to be based on relocation within the prefecture. He said the government does not understand that Okinawa has been suffering from the base burden since the end of World War Two. 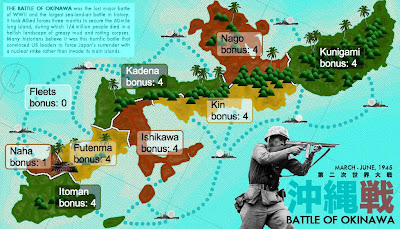 Ladies and gentlemen, this is how democracy works. Things change, people vote for a new government with new ideas.

I have lived in Japan for quite some time, and this is a great moment to observe not only how Japanese people are rising up to the challenge of how their country is run and how decisions are made. Those of us who have been here for a while also take a great interest in how foreign media report from these islands. How do Americans deal with "change" or why do they not want to change?

Today, The Times had a report from Okinawa, Japan by Bronwen Maddox, the Chief Foreign Commentator for that very influencial newspaper, recently bought by Rupert Murdoch. Interesting choice of dispatch, I would say, as she is on the record for her views in her book with the title, In Defence of America.

Does she defend the United States of America, or perhaps another agenda? Stay tuned. Things will get interesting as foreign media suddenly seems very interested in Japan.

Times Online: 65 years after the war, Japan needs convincing of the need for US bases

I only have one small problem with that: Bronwen Maddox shows such a lack of knowledge about - or interest in - this country, when she makes remarks like this:

Apart from the emotions roused by the US presence on Okinawa, the 2006 plan to move Futenma to Henoko and to build two airstrips out into the bay, has also provoked a rare thing — a Japanese environmental campaign in defence of stunning coral reefs and the dugong, a sea mammal akin to the manatee.

Rare thing? Read that again. If she doesn't know very much about Japan, why not go ahead and tell the readers that? Don't make up opinions like "a rare thing" without talking to the many environmental organizations with a long history in this country - she could start with WWF Japan or Greenpeace Japan, or even Friends of the Earth Japan. Those would be rather easy for her UK readers to relate to. Not to mention hundreds or even thousands of national and local groups fighting to preserve and protect the environment, many now campaigning for biodiversity as the UN meeting will be held in Nagoya this year.

Yes, do talk to the locals before making that kind of impolite, rude, and insulting remark.

Bronwen Maddox does talk to some locals in Okinawa in her first dispatch from the islands. I hope the people in Okinawa will talk honestly and fairly to any foreign journalist just having arrived to their shores. There will be a lot of misunderstandings, and "lost in translation" moments.

In fact, Bronwen Maddox does that rare thing as a journalist, and I think she knows it; Okinawa is such a story. She didn't intend to insult Okinawans or Japanese people by that remark, she just had no idea.

And, she also allows the personal point of view to come across quite strongly, within the context of her story, to put tears in the eyes of the readers:

Masako Nakazato, 82, one of a famous group of schoolgirl nurses during the battle, echoed the widespread anti-war sentiment on Okinawa. She said: “I don’t think badly of Americans but all military attracts war to itself, and war is disaster.”

(Photos from Sillysoft, a computer game company, and A World To Win, Zengakuren students and workers protesting on May 14, 2006, in Okinawa)
Biodiversity Hiroshima Nagasaki NGO Okinawa Peace politics US military bases

Tom O said…
"Yes, do talk to the locals before making that kind of impolite, rude, and insulting remark"

Whats that saying, "Never let the facts/truth get in the way of a good story." Whatever the implications. Alas its not a derogatory remark to the Times' readership, not on their radar. She's writing for 'The Times' - she must be telling the truth.

"I hope the people in Okinawa will talk honestly and fairly to any foreign journalist just having arrived to their shores. There will be a lot of misunderstandings, and "lost in translation" moments."

Its not the Okinawans who we have to worry about talking 'honestly and fairly' here, ne. 'In Defence of America' -
"acclaimed foreign affairs columnist Bronwen Maddox shows how critics of America take the best of it for granted and exaggerate the worst.".
This person is on Okinawa right now?? I'd be a tad suspicious, whats her agenda...

"She didn't intend to insult Okinawans or Japanese people by that remark, she just had no idea"

Didn't intend? Had no idea?? No excuse Ms Maddox. Not for 'an acclaimed foreign affairs columnist' anyway. Journalism/reportage + ignorance - never let the facts....
4:02 am, March 12, 2010

Pandabonium said…
There is a perception abroad that Japan is not so environmentally friendly and in an "in your face" kind of way - in the news often slaughtering dolphins, killing endangered whales in an international whale sanctuary, opposing a bluefin tuna ban, and so on.

These cases don't give an accurate picture of the broader environmental activism in Japan, but they are certainly highly visible and perhaps why many people in other countries may have a distorted view.

This obviously is not excuse for Bronwen Maddox comments as she should know better, and probably knew exactly what she was doing.
11:07 am, March 12, 2010

Tom O said…
Two sides to every story. Sure, the dolphins/whales/tuna angle + 'roads to nowhere' policy dominates the agenda but then why not give due coverage and respect to those within same said country that DO try and oppose the above and make a difference. If nothing else its a good story - there are always people, whatever the odds, will stand up for what is truly right/true. I personally don't count chaps who use a jet-ski to board a Japanese whaling ship to try and make a citizen's arrest (jodan dessho?!?) among this number. What happened to the jet-ski, did it sink?

Pandabonium said…
The "news" media in the UK, USA, and elsewhere is not going to cover local Japanese environmentalists - they usually only cover their own when they can put it in a negative context. "If it bleeds, it leads", so those are the stories that get in the news.
10:17 am, March 13, 2010

Martin J Frid said…
Thanks for the comments, you both make excellent points that are relevant - since you know this country well.

I recommend this 432 page book to anyone who wants to know more: