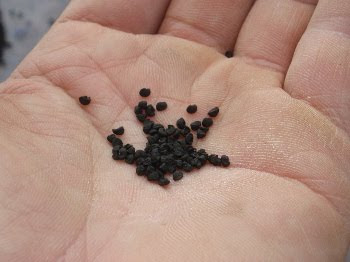 Now, in early March, is the time to start thinking about which vegetables to farm this year, if you haven't already started like I did in mid January, when I joined Yanagido-san to help him plant daikon radish and carrots. 5-6 weeks later I can report that the daikon are doing well, with roots about 20-30 cm and lots of leaves. He thinks we had enough moisture in the soil, so the roots are"going for it" so to speak, going straight down. We pulled one of them up today and it was white and tasty but pencil thin. Later, the daikon root will expand and get the shape of a lady's leg, as they say here. The carrots appear to be more slow but that seems to be the way of nature, and I'm told we are on schedule. 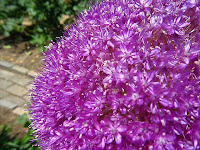 Today we put tiny negi leech onion seeds into special paper cups with soil and fertilizer. It was very difficult work but a lot of fun. The tiny seeds are black and almost as small as carrot seeds, but not as light. These are some very tiny packages of DNA.

We put two seeds into each cup. Later, when the green sprouts are up and about, Yanagido-san has a special machine to pull out the long line of paper cups and re-plant them outside in one of his fields. The paper cups make it possible to push two seeds into each cup, something that would be very difficult to do out on the field, because they are so tiny and hard to handle. The paper, he says, will just disintegrate and turn into mulch with the moisture. 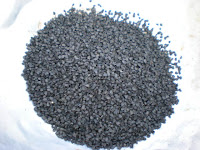 The seeds are from Takii Seed Co. - one of Japan's oldest seed companies. The bags say they are from Thailand, but that just means the seed company has fields there to propagate this kind of seeds and make as much profit as possible. Imagine the return: 300 yen for a small bag with 100 seeds, almost the same as what you would pay for gold or precious stones, per weight.

I would like to use certified organically seeds or learn how to save my own veggie seed. In Japan, that is quite possible, and it would require a lot of knowledge and skill. At least we did not plant F1 hybrids today, and of course not GMOs. There is no commercial farming using genetically modified varieties, as Japan's farmers care about food safety and environmental sustainability. There is just no beauty in GMOs...

Meanwhile, I'll keep working on my farming skills, to figure out how to do this properly. Next week we will plant potatoes and I imagine at some point, there will be a lot of weeding to do during the hot, humid summer...

(Photos from Umechan and Happy Vegetable)

Takii Seed Co. claims to have a history going back to 1835 but I would like to see more information about the early days. For example, they say nothing about their operations in Korea during the period of Japan's colonial rule. Also, why no information in English beyond 2002? 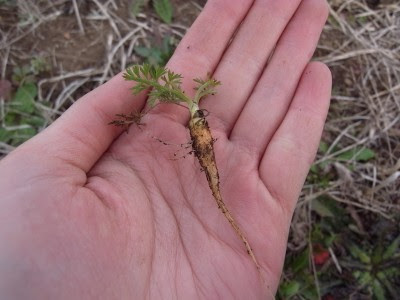 Negi will bloom, quite a large bulb in fact, and the flower is purple. However, my friend uses ordinary Takii Co. seeds that says "Thai" on the package. Seed farming is a special sort of agriculture business that the major seed companies have developed to make as much profit as possible, using jet planes to rush the seeds from one location to another where they can propagate (make more seeds) before selling in markets like Japan. We used two types today, one has a small ball of "stuff" around it to make it more easy to pick up and handle, while the other is just the tiny seed which is quite hard to see or plant.

This is what the tiny "ball" around the seed will contain, according to Takii Seed/European Seed Association (pdf): A "seed core" with the DNA, fungicides (chemicals), coating layers, insecticides (chemicals to repel or kill insects), a finishing layer (as protection) and color. They claim this helps farmers get higher yields, as they can use less chemicals on the plants. 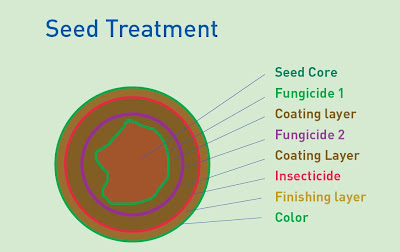 I wonder if there was ever a time in history when ordinary people were this far removed from seeds. The small, special, precious seeds that can ensure that we have something to eat this year and next. Our ancestors used to know how to farm plants and save seeds. What happened? We got used to buying seeds from companies. Fair enough, they provide a lot of variety, it seems.

But in fact, the large commercial seed companies have not been very good at keeping and developing heirloom varieties - that has been left to smaller operations, organic farmers and others. The names of F1 carrots, red peppers, green peas and tomatoes also indicate that they are from outer space or from the world of manga, rather than from Planet Earth...

Planting seeds will assume that you have access to seeds, these tiny depositaries of DNA that carry the amazing genetic heritage from one generation to another. And why do old-style vegetables taste better?
Biodiversity farming Food Organic sustainability

Martin J Frid said…
Thanks for the comment Kat, I'm also thinking of red peppers for my garden. Did you keep the seed bags? It would be interesting to know what you used. Best wishes!
8:32 pm, March 01, 2010

Btw, came across this over the weekend and very relevant to this!

Martin J Frid said…
Tom, Thanks! Seed bombs are a great idea. Much better than other bombs ;)

The origins of the seed bomb is actually an ancient technique in Japan called Tsuchi Dango translated as Earth Dumpling. Masanobu Fukuoka, a Japanese microbiologist and soil scientist specializing in agricultural science reintroduced the custom in 1938.

He is a pioneer of sustainable agriculture and an advocate of biodiversity. He initiated the "natural farming" philosophy and "one straw revolution", a farming technique that does not require weeding, pesticide, fertilizer, or tilling- going beyond a scientific and organic approach.

There are many recipes out there, and here is one of them:
Combine 2 parts indigenous seeds with 3 parts compost.
Stir in 5 parts powdered red or brown clay.
Moisten with water until mixture is damp enough to mold into balls.
Pinch off a penny-sized piece of the clay mixture and roll it between the palms of your hands until it forms a tight ball (1 inch in diameter).
Set the balls on newspaper and allow to dry for 24 - 48 hours. Store in a cool, dry place until ready to sow.
9:02 pm, March 01, 2010

Anonymous said…
Martin, really enjoyed this post. Thanks for sharing.

inaka brett said…
great article. i had no idea they added different layers to seeds. and thanks for the noguchi link and interview - we've been getting seeds from him for awhile now and it's cool to learn his history.
3:11 pm, March 03, 2010