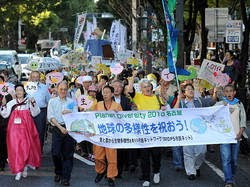 Some 1000 activists, farmers, and consumers held events in Nagoya on Sunday, with a big parade through the busy city. The Japan Citizens' Network for Planet Diversity, Co-ops including Seikatsu Club and many local NGOs, Organic farmers and members of the Shumei Network, and Consumers Union of Japan and the No! GMO Campaign made the front page news this sunny Monday morning, as the government delegates start negotiations today about biological diversity.

COP10 starts with MOP5 (including liability and redress issues), and there has been some progess.

The way these negotiations work is complicated and they used a style that is called "Friends of the Chair" to deal with gridlock, when opposing parties cannot agree. This means the negotiations take place with smaller groups of countries, and the results are then proposed to the others. Last night, this went on past midnight, until after 2AM, when a solution was found.

Thus, one important topic was solved rather cleverly early on in the MOP5 negotiations in Nagoya.

Many countries and NGOs wanted the text to refer to both the Living Modified Organisms that can damage the biological diversity, but also the "products thereof" - a way to include proteins and toxic substances that we would not want to spread in the environment. But, this term was controversial. Some countries, especially the food exporting countries, thought it can lead to trade barriers and go against the "obligations" that countries have under the World Trade Organization. The idea had been bitterly opposed even by Japan, a country that imports food...

The chair of course refers not to a piece of furniture but is UN-speech for the chairman... and he was able to come up with a text that says:

It emerged during the negotiations of the Supplementary Protocol that Parties to the Protocol hold different understandings of the application of Article 27 of the Protocol to processed materials that are of living modified organism-origin. One such understanding is that Parties may apply the Supplementary Protocol to damage caused by such processed materialss, provided that a causal link is established between the damage and the living modified organism in question.

By agreeing on this, countries that want to can have more strict legislation, to protect their biological diversity, the environment - and human health.

21 official documents so far, and this is just the first day!

The real difficulties over the next weeks will be how access and benefit sharing should be handled for genetic resources. NHK World notes:

In the preliminary talks, a rift became apparent between developing countries that possess most of the resources and the developed countries that use them.