Last Minutes From MOP5-COP10 In Nagoya 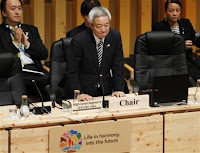 You can watch the livewebcast from the United Nations biodiversity conference on this website (this is as good as it gets):

3 documents are left late Friday night: One is clear (no square brackets) and two that still need discussion.

India notes that this has been the most successful of all COP meetings. India is eagerly looking forward to welcoming you all to India in 2011. Sayonara!

At 2:20AM, the representative of the indigenous people also mentions the struggle of the people in Okinawa against the construction of a military base in the sensitive Henoko area.

Malaysia is commenting that 2 protocols have been adopted in Nagoya, including the Nagoya-Kuala Lumpur Supplementary Protocol on the Cartagena Protocol about liability and redress in case of damage caused by genetically modified organisms.

You lose some, you gain some, but Malaysia feels confident that the new treaty on Access and Benefit Sharing (ABS) will make sure that genetic resources will be shared fairly. Malaysia especially thanks Africa for the negotiations. It was joyful, it was fruitful. Offers profuse thanks to Japan, not for Swiss time, but for Japanese time. We leave Nagoya with two treaties in our pockets.

Namibia notes at 1:48AM (Saturday) that the Nagoya Protocol is a gift to his government as a birthday present, and thanks everyone, above all, thanks the sons and daughters of Africa who walked this road together with Namibia: We are truly grateful.

With Bolivia's concerns out of the way, all 3 documents, including the Access and Benefit Sharing document, were adopted at 1:30AM. Ryu Matsumoto, Japan's minister of the environment, the chair, says he is deeply moved. The next meeting, COP11, will be held in India.

Regarding "Innovative financial mechanisms," by 1:14AM Bolivia cannot accept that all the 3 documents are adopted, but the chair is noting that the majority would like to adopt it. Australia agrees. Bolivia wants their proposal to be included in the final document. Cuba supports Bolivia, and wants to include the proposal, which was also supported by Equador. After some clarifications, Bolivia's proposal was included.

Cuba and others are concerned about the adoption of 3 documents at the same time tonight. About the ABS: All of the years we have spent protecting the poor countries, Cuba does not agree but will not stand in the way of the consensus that is building.

Korea's intervention got a huge rounds of applauds for supporting the chairman's proposal to go ahead with all 3 documents.

Venezuela does not support, and wants that to be included in the report.

Africa says it is not the best document, but they are able to live with it as a starting point...

Benefit-sharing protocol to be voted on

Japan is growing optimistic that its draft protocol on the sharing of benefits from genetic resources will be adopted at a UN conference on biodiversity.

The issue has been a key sticking point during 2 weeks of talks at the COP10 conference in Nagoya, central Japan.

The protocol is aimed at ensuring fair distribution of benefits from genetic resources that richer countries have obtained to develop medicine and other products.

Chair country Japan drew up a draft proposal after industrialized and developing nations failed to narrow their differences by the deadline of midnight Thursday.

Japan presented the draft at a plenary session on Friday -- the last scheduled day of the marathon talks.

NHK's correspondent says Japanese officials met individually with delegates of the participating countries on Friday morning, and learned that the draft proposal has broad support if some of the wording is changed.

Optimism is growing that the proposal will be adopted unanimously in a vote scheduled for Friday.
2010/10/29 17:53

Japan presented the chair-country's proposal to the UN biodiversity conference after participating countries failed to agree on how to share the profits from biological resources.

A full session of the 10th Conference of the Parties to the Convention on Biological Diversity in Nagoya, Japan, will vote on the proposal on its last day on Friday. A unanimous vote is required to adopt the proposal.

By the deadline of midnight Thursday, industrialized and developing nations had failed to come up with an agreement on a protocol to define ways to share profits from products developed using biological resources.

In a last-ditch effort, the Japanese government presented its draft as the chair of the conference on Friday.

The chair country's draft says profits generated after 1993, when a biodiversity pact took effect, should be shared. Although the draft rejected demands from developing nations for compensation from as far back as colonial times, it calls for a new fund to help developing nations protect their ecosystems.

The Japanese proposal also allows a certain amount of profit-sharing for processed products, rather than just for biological resources that are used as ingredients.

A negotiator from Namibia said his country is assessing the chair-country's proposal, and that the issue is whether the proposed protocol would be functional.
2010/10/29