When the Emperor and his wife Michiyo-sama took the Imperial Train late September 2010, a large number of densha otaku (I suppose "trainspotters" is the best English term, but some are of course just parents that bring their kids) were delighted: They all take photos and post videos on Youtube and other Internet media.

The train is a E655 and it had not been used for 2 years. This black train is much like Air Force One in the United States, but more down to earth, so to speak. The first Imperial Train trip was on 12 November 2008, when the train was used for a trip that the Japanese Imperial couple took with the Spanish Royal couple. It is a VIP train that ordinary people can also ride, as part of JR's extensive promotional activities called Joyful Train.

お召し列車 Omeshi Ressha refers to a non-scheduled service solely operated for the Imperial Family. E655 is built by Tokyu Car Corporation and Hitachi Ltd. The E655 series unit can be hauled by a diesel locomotive on non-electrified lines, in which case power for air conditioning and lighting is supplied by the diesel generator in car 1.

Train makers like Tokyu are very much in symbiosis with other manufacturers around the world, and have a long history of working together. Tokyu first licenced technology from Budd Company from Philadelphia in the early 1960s.

Today, as Japan pitches its Shinkansen trains to the United States, perhaps there are links with rail fans in the US that could be nurtured and encouraged. Hitachi, meanwhile, has been exporting trains to UEA in the Middle East, to the UK and to South Korea. Hitachi is active in China, including Shanghai and Beijing, but appears to play down its role to not upset clients in the communist country. 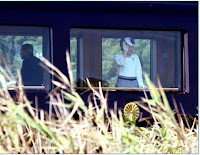 The Emperor looked at rice fields in Chiba, and the Empress waved to the trainspotting crowds.

I also like the simple ceremony caught in this video, showing three JR train workers unwrapping the two Hinomaru flags and polishing the Imperial Seal, and how it shows a lot of attention to detail.

I'm usually no huge fan of royalty, but when they promote trains and public transportation, and appreciate the hard work of farmers (such as the Imperial Household's Organic Farms back in February 2008), I tend to think it is rather Kurashi-like stuff! Only thing is, did they have to paint it black? Why not a nice, dark red or a very deep purple, or a dignified royal marine blue...?