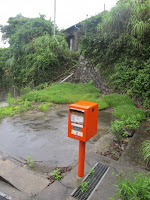 “Goodbye King Coal, you venal tyrant,” I thought to myself, “and good riddance. It’s good you’re gone, gone at last from these lands at least, gone with your lives cut short by dust blast and black lung, gone with your weeping widows, gone with your fatherless children. And goodbye to you, too, Ikeshima: may your dreams of ruin come true, may you rust in peace.”

Bloggers like Spike Japan make blogging seem fun again... He has the insights into the way rural Japan (and the centres of many small towns) are faring these days, with the once so vibrant shopping archades of the late 1970s and their plastic roofs and signs not-so-bright-and-colourful anymore, neglected beyond hope.

It may come as a shock to almost all of you living outside of Japan, and to some of you living in the center of its big cities, that as we approach the summer of 2009, swathes of the country are in ruins. It came as a shock to me, too, I have to confess, having lived for almost all of the last decade in the bubble of central Tokyo and only venturing outside occasionally to get to the airport, nearby beaches, and old friends in the mountains.

There are many places where the local economy does rather splendidly, of course. I don't think Spike Japan is going to visit them, so keep that in mind.

Old coal mining towns and islands are not doing so terribly well anywhere, these days. What I am more concerned about is how we can learn lessons from this, as we go from Peak Coal to Peak Oil, and the economy that will follow after that. And, the fact that most of us don't know how to farm beyond the simplest Mickey Mouse F1 seed-company induced summer veggies that wouldn't sustain us for very long.

When the towns and islands in Spike Japan's long and carefully written posts died, the residents could move somewhere else. Much like the "immigrants and refugees" that now live in old coal towns with burnt brick buildings from the 19th Century in northern parts of England and the tax-supported concrete apartment towns with walls and ceilings made of plastic that boomed in the 1960s and early 1970s (before that Oil Crisis, that we all prefer not to think about) in Scandinavia - - where would I go, if it all just collapsed?

His posts from the deep north, Hokkaido are terrific, too.

I like how he starts with a quote from Alan Booth's classic The Road to Sata (1985):

“Well, just remember this”, he said, getting up off his stool for the conclusion of the lecture, so that he stood a good deal taller than I did: “A country’s like a sheet of paper; it’s got two sides. On one side there’s a lot of fancy lettering—that’s the side that gets flaunted about in public. But there’s always a reverse side to a piece of paper—a side that might have ugly doodlings on it, or bits of graffiti, or goodness knows what. If you’re going to write about a country, make good and sure you write about both sides”.

Seriously, this is a blogger who has even visited Sata. You get bonus points if you even know where Sata is. Sadly, I had no idea, as I read Alan Booth's book a long, long time ago. Japan Spike reminds me of that: I came to Japan a long, long time ago!
Economics 101 Energy Hokkaido peak oil prayer progress