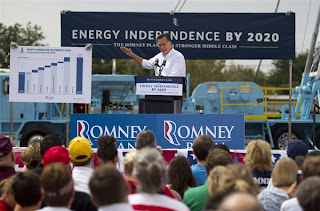 Returning to Japan, I have jetlag issues that remind me of how fragile we are in our human bodies. Mind over matter? Hardly. I bet politicians and other people who travel too much get a taste of this on a regular basis, thus they don't make so much sense when they appear in front of committees and conferences.

That is no excuse for Mr. Romney, who pushed for his "energy independence by 2020" plan by "removing regulatory barriers to fossil fuel development in the United States, and increasing cooperation with fellow energy-producers Canada and Mexico." 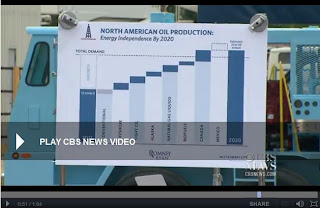 You guys out there that drive a car to work and think gasoline is already too dear, think again. There is no such thing as cheap oil, as consumption is increasing in China and India. And we are not finding new oil reserves to replace Saudi Arabia. What really struck me as weird was the chart that the Guy-Who-Wants-To-Be-Elected-Leader-Of-The-So-Called-Free-World used.

Note how it says "Tight Oil" just before "Alaska" (as if oil will suddenly emerge from the northern state). Tight oil is news to me. I have heard of "Shale Oil" and other expensive processes to get oil from the ground in places like Alberta, Canada, where the environmental consequences are horrendous. They even need nuclear reactors to process the shale oil into something that can be used in regular engines. It is not "oil" as we know it. So what is "Tight Oil"?

Before answering that, take a look at how main-stream media presented Mitt Romney's speech.

Note how CBS presents it as "Mitt Romney laid out his six-step plan to get North America on track for energy independence by 2020" BUT they don't even have the journalistic integrity to introduce this "six-step plan". Is it the plan on the chart?


Mitt Romney's plan, laid out in a white paper and conference call with reporters last night, calls for streamlining the permit process for energy development on federal lands and offshore, for building infrastructure like the Keystone Pipeline, and supporting basic research on next-generation fuels like wind and solar, while abandoning subsidies and loan guarantees that, Romney argues, have tilted the marketplace in favor of those energy sources.

"Tight Oil" then is indeed a pie-in-the-sky idea. Have you ever even heard of "Tight Oil" or got any idea what it might be? The main-stream media in the US does not try to explain it. It is more difficult to get anything useful out of "Tight Oil" than from "Shale Oil" that is currently hotly debated in places like Alberta, Canada, because of the toxic implications of trying to get it out of the ground. It has also been called "Unconventional Oil" or "Tar Sands" and it simply is never going to help anyone achieve energy independence, because it is so dirty and expensive.

In fact, Mitt R. proposes nothing, except to keep consuming more, keep using more, keep on wasting oil and gasoline as if there is no tomorrow for this planet. What does it mean, to make the United States energy independent?

The implications for countries like Japan will be to just shake more intelligent heads in disbelief.

We are all in this together. We currently import huge amounts of high-grade oil products from the Middle East. Fuel is refined in a number of different countries before exports. We are using uranium for nuclear reactors, imported from a number of countries, and nuclear waste is also taken cared of through agreements between countries. We depend on global, multinational corporations for our energy supply. All paid for by tax payers and consumers. It is complicated. Please do not make it sound simple, and then make jokes about it. It is not funny, Mitt. 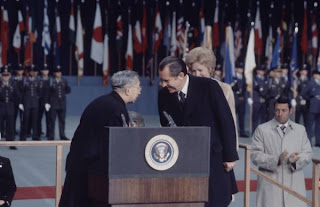 On September 26, 1971. another American Republican, Richard Nixon, visited Hanford, the birthplace of nuclear bombs, just before going to Alaska to meet the Japanese Emperor, and before going to Peking, China.

His speech is billed by the Richard Nixon Foundation as "President Nixon outlines his administration's plan to develop cleaner, renewable, and more plentiful sources of energy" but is is nothing of the sort. He clearly jokes about not knowing what a breeder reactor is, and refers to his short-comings when it comes to science. Nixon relied on others when it came to ideas about energy. Well, we know what happened to him. Still worth watching.


Mr. Nixon was a lot less optimistic on 7 November 1973, with the US in the throes of the oil crisis. He outlined the measures envisaged by his government with a view to guaranteeing that the US will "never again have to rely on imports for its oil supplies."

Tom O said…
In the first place we have a guy here who makes not only makes Reagan look an intellectual but George Dubya George come across as Einstein. THEN, as his running mate, appoints a guy who by all accounts (and, of course, being a Brit of brains) is even MORE right wing. 'Impressive'. Then, in the US's 'democratic' only 2 party system is a system whereby (gomen, whatever 'House' governs whatever) can vote against the incumbent government's policies for their own benefit!?!?!? WTF?? The whole healthcare thang nado. Its all just so frigging nuts AND, of course, being a Brit (I'm from London dontcha know..) as ever not surprising. I could go on to mention all that 'secret' Agent Orange (and whatever) stored in the Okinawa are but due to decorum won't...

The US, where everybody doesn't walk when of course there is a car to use and 'gasoline' costs nothing, thus encouraging said. Call me cynical... But, as always, it was ALWAYS great to be from London/a Brit in Japan. Did I mention James Bond?
3:56 am, August 26, 2012

Unknown said…
The Republicans still haven't figured out that it is of their own party line for us to get off oil dependence.
7:21 am, August 26, 2012