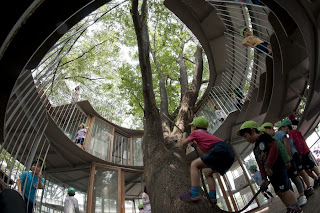 A Montessori kindergarten in Tokyo? I had no idea. Over 600 pupils. And their school is designed by a couple of architects who have children themselves, and wanted only the best, based on studies. This was done back in 2007, and it turns out that this is one kindergarten with no bullying, and no violence. Well, I'm sure kids are kids... But, I'm also sure the Italian-born Maria Montessori would have approved.

The point is, as I learnt on Monday listening to Tezuka Takaharu describe this OECD-lauded project, is the slope. The entire shape tints, and kids just love it. If it was an ordinary running track, there would be no fun, no exploration, no discovery. The roof shape and angle is an invitation to go for it. However, when CNN visited, some kids got hurt. Thus this haven is very careful about visitors.


Plus there are trees to climb, great zelkovas.

And there is also an annex:

While the main building is elliptical, lacking a precise center, the annex has a clear focal point. Its original design drew inspiration from the legend of Buddha preaching under a linden tree, but the space was not used exactly as we had envisioned. Despite the openness of the English classroom, the teacher and children prefer to squeeze into tight corners and niches between floor plates. The five meter-tall building has seven levels, with clearances ranging from 600mm to 1500mm. This idea came from the school's vice principal who requested "a classroom without furniture." When we showed our son and daughter, they touched the ceiling with their hands, smiling. The principal, Mr. Kato, said that for children, the ceiling is like the sky - they cannot touch it. When the sky is lowered to their level, it transports them into the world of giant adults. If you visit the school on a nice day, you'll find giggling kindergartners wedged into spaces less than 60 centimeters high.

So, this project caught the attention of OECD, that lauded it in a January, 2011 report. Here is a video that shows the way Fuji Kindergarten works - for the kids (J).

I wish there was more information about the Montessori education in Japan... Seems it started with a book was published in 1968, that spurred the movement. Sophia University has done some work but there is nothing left on the Internet, and the Tokyo Montessori blog (J) isn't exactly updated much... Maybe the Internet and Montessori pedagogic fundamentals just do not match? Then again, there is the Sainou website (J) with roots from the first school founded in 1976 which really gives a better picture of the depth of the activities here. Anyone out there reading Kurashi, with toddlers in this amazing nursery?

Tom O said…
For the record there are quite a few Montessori schools in London.

Tom O said…
I used to 'teach' kids in Tokyo - pure fun and and pleasure. People/friends used to notice that I was happier AFTER 'work' than before. I think, tabun, that in Japan kids are actually allowed to be kids.

Unknown said…
Is there an English version of the website to this specific Montessori school?