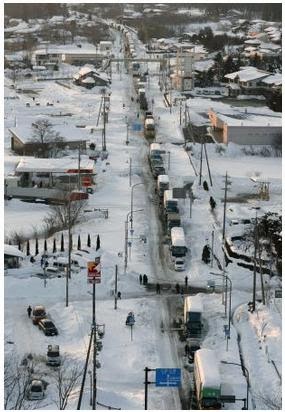 The second deluge we got here on Friday was worse than the previous one. Still on Monday, several thousands of people northwest of Tokyo are isolated or trapped in their homes, with meter-high snow covering roads and roofs. Kofu in Yamansahi prefecture got some 120 cm, more than ever. My town and Chichibu (J) to the northwest was/is cut off from all communication.

The Mainichi (J) noted that some 8000 people at one point had no way to get out and about, from Shizuoka in the south to south-western Gunma.... 19 people dead, so far (J). 9000 plus according to later reports (E).

Imagine sitting in your car for two days without any idea of when you may be able to drive home.

This should of course be considered in terms of global climate change.

We are noticing severe weather patterns in many parts of the world. Japan may be a little slow in officially recognizing this. Such an inconvenient matter...

The Rational Pessimist has been blogging about how re-insurance companies around the world are increasingly worried about severe weather change.

Just as Hurricane Sandy brought climate change back into the political debate in the United States, the floods in southern England have made climate change a topic for public discourse again in the U.K. Indeed, opposition leader Ed Milliband has felt sufficiently emboldened by the floods to put climate change back onto the agenda of any incoming Labour government as witnessed by his interview in The Observer newspaper, In this, he claims that Britain is “sleepwalking into a climate crisis”.

The Association of British Insurers’ (ABI) submission to the U.K. parliament talks of around 200,000 homes (some 1 to 2 percent of the total housing stock) that would now find it difficult to obtain flood insurance if open market conditions solely determined availability (and if they can’t get insurance, they won’t be able to support a mortgage).

For climate change “skeptics” who believe in free markets, the fact that the British insurance industry takes climate change as a given, and has done so for many years, is a difficult fact to face. In a forward to a report called “The Changing Climate for Insurers” back in 2004, The ABI’s then Head of General Insurance John Parker was unequivocal:

Climate change is no longer a marginal issue. We live with its effects every day. And we should prepare ourselves for its full impacts in the years ahead. It is time to bring planning for climate change into the mainstream of business life.

What the ABI is doing through requesting the government to create a new insurance arrangement after the expiry of the Statement of Principles agreement in June 2013 is to “prepare ourselves for (climate change’s) full impacts in the years ahead”.

It applies to Japan too, as Swiss Re noted in a report last year:


When cities are struck by a natural disaster millions of people's lives can be disrupted and the economic impact can be quite considerable. Swiss Re's publication, Mind the Risk: A global ranking of cities under threat from natural disasters, provides a risk index comparing the human and economic exposure of 616 cities around the globe. The study is a basis for decision-makers, as well as the insurance industry and the broader public to promote dialogue on urban resilience.


Japan has a General Insurance Association that traces its history back to 1917. No mention of climate change, more worries about earthquakes... How about they put climate change back on the agenda?


Global warming and climate change have caused increased risks of typhoons, droughts, torrential rainfalls and other natural disasters around the world, posing a serious threat to our social lives. As risks of natural disasters are rising, which has been anticipated since the 1990s, insurance companies contribute to society by offering appropriate insurance products and making insurance payments. The insurance business is closely related to climate change and risks of natural disasters. Naturally, response to these two threats is now considered a major management issue that the global insurance industry has to address in the medium-to-long term.


We believe that the mission of Tokio Marine Group is to stably provide insurance products and risk management services against various risks and ensure "safety and security" in society.

Insurance companies are also expected to provide various climate change and natural disaster risk solutions to society based on expertise accumulated in the insurance business encompassing the payment of insurance claims, risk assessment and asset management. In addition to providing products and services in developed countries, another important task of insurance companies is to encourage the establishment of an insurance mechanism and disaster prevention and risk management practices in developing countries and regions vulnerable to the impact of climate change.


Other people who ponder the issue of climate change, and its effects on everything from island populations to water resources: Back in 2008, the Ministry of Land, Infrastructure, Transport and Tourism offered this advice:


What global climate change will ultimately do to Japan is anyone's guess. More or less snowfall is not the problem, what we may have to deal with is the extreme weather patterns, much like what we have been experiencing here over the past 10 days.

Record snowfall over the weekend continues to paralyze traffic in inland prefectures of central Japan. Thousands of people are trapped in their homes, cars and trains. In the prefecture of Nagano, more than 500 vehicles have been stuck since Saturday morning. Self-Defense Forces personnel are joining the snow removal work. But road authorities say they can't say yet when traffic will start moving again.
In neighboring Yamanashi Prefecture, nearly 50 spots on main roads have been blocked due to heavy snow, stranding more than 1,000 motorists. 18 cities and towns in the prefecture have opened more than 50 evacuation centers, sheltering 1,600 people who were stranded in cars and trains.
The bad weather also affected trains. JR Chuo lines have been halted in the area since Friday. Passengers sheltered at the nearest hotels and public buildings. Prime Minister Shinzo Abe said the government is dispatching a team to Yamanashi Prefecture on Monday, to assess the situation and see what assistance is needed.