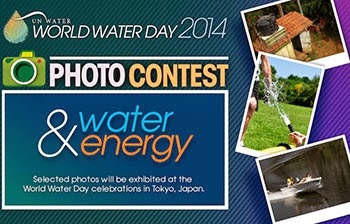 Exciting things happening over at UNU here in Japan. Established in 1973, this is the academic and research arm of the United Nations. Great place for your higher education, I'm told. UNU upcoming events here.

More about Applications for their 2014 Fellowships here.

The UNU Institute of Advanced Studies also has an archive of research papers here.

And if you care about sustainable development, and have ideas from behind the camera, here is your chance. If you are in Japan and East Asia and everywhere else, do contribute. Let's do it in a different way. Mainstream media just wants war and conflict.

We can do better.

Good article here about a guy in LA who is trying to do something about the lack of water in that huge city and the rest of California.


Andy recently convened a meeting of experts and government officials from Australia with the heads of the water agencies in the LA region:


“The first question I asked when I assembled all these key leaders was, “when in your 12 year drought did Australia realise it was in the middle of a 12 year drought?”  I asked that obviously because we have this problem with denial. You don’t want to flip the switch and make this change because it might rain at any moment.  He said the place where he marked that wake-up call was 18 months before the drought ended, when the government decided to invest big time in desalinisation plants in all the big cities.
The problem is, they barely were started with construction by the time the drought was over. When it was raining, people had so profoundly dropped their water use by the time the plants were finished – they’re not even all finished yet – but those that were, no-one bought the water and they couldn’t afford to run them, so they’re been shut down. The one in Sydney’s been sold. It’s being held in reserve in case there’s another massive drought, but people’s water bills have more than doubled, the governments in all the states have been thrown out by angry taxpayers and that is a very important cautionary tale”.

...accepting photographs for the Facebook Photo Contest on Water and Energy starting on 15 January 2014.

Participate and win a chance to have your photo exposed during the main World Water Day 2014 celebrations on 20-21 March 2014 in Tokyo, Japan.

Please submit a photograph that best reflects the following statement:

"The World Water Day 2014 theme of Water and Energy is central to achieving a sustainable future. It also cuts to the heart of inequities, particularly for the poorest of the poor, who suffer greatly from lack of access to water, sanitation and modern forms of energy. World Water Day aims to raise awareness across a broad range of business domains and government sectors to solve water and energy challenges in a cohesive way."

Pandabonium said…
Having grown up in the near desert of Southern California myself I am hip (and not very sympathetic) to the water problems they face there. It isn't like this situation is a big surprise.

Instead of working to ameliorate the situation by making big changes in water and energy use as well as development regulations, the powers that be have instead focused on ways to prop up business as usual and delay the day when they will have to face the situation head on.
5:35 pm, February 13, 2014