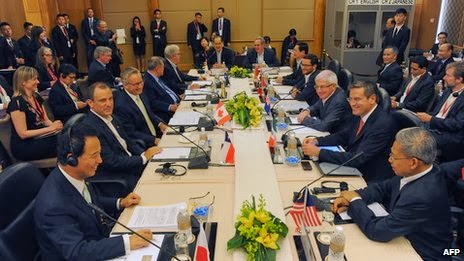 Prime Minister Abe has been busy with all kinds of arrows to promote Japan and its economy. One was the Trans Pacific Partnership negotiations, a deal that no one seemed to be able to define, and who would benefit? At least here in Japan, it was never made clear.

The latest round of negotiations that I have been following - in Singapore - ended without a deal.

That is Abe's man in Singapore, with his headphones on, and everyone seems to be having a laugh.

Reuters says: UPDATE 2-No end in sight yet for Trans-Pacific trade pact

An ambitious 12-nation free trade plan, the Trans-Pacific Partnership (TPP), has hit a new roadblock after four days of negotiations in Singapore. Sticking points over market access and differences over tariffs on imported goods were the main reasons cited. TPP members were also aiming to set a common trading standard on a range of issues, including labour regulation and environmental protection.

Japan's minister in charge of negotiations for the Trans-Pacific Partnership free trade agreement says his country and the United States will continue working-level meetings to reach a broad agreement.

Akira Amari made the remark in Singapore on Monday after he failed to come closer to an agreement with US Trade Representative Michael Froman. The 2 met on the sidelines of the TPP ministerial talks.

Amari used the meeting to ask the US to remove its tariff on Japanese auto exports. Froman urged Japan to open its agricultural market to US products.

Amari told reporters he cannot say he sees the 2 sides coming closer to an agreement even after 2 meetings with Froman. But Amari says he and his US counterpart are engaged in an active discussion.

Amari reported the negotiators have not yet reached a consensus in the ministerial meeting, but they are finding more common ground regarding some issues.

He says the negotiators plan to discus the topics they have not yet agreed on when they meet for their final conference on Tuesday. He adds that he will do his best to work toward a favorable outcome.

Australian Trade and Investment Minister Andrew Robb said a Japan-US agreement is vital to a final TPP deal, as the 2 countries together account for 70 percent of the 12 nations' gross domestic product.

New Zealand's Trade Minister Tim Groser stressed that market access is the heart and soul of any trade agreement. He said unless the issue is resolved, the 12 nations will have no agreement.

Japan and the US remain at odds over access to Japan's farm market and the US auto market.

TPP talks status by category
Overview of the status of the TPP talks that ended on Tuesday in Singapore:

The ministers made some concessions on intellectual property, one of the most difficult areas of negotiation.

The United States reportedly showed consideration for Vietnam and Malaysia, which have been seeking easier access to cheaper generic medicines.

But no agreement was reached on how long drug development data should be protected.

On conditions for competition between state-owned and private businesses, the ministers are now ready to discuss what kind of firms should be treated as state-owned. But they're still at odds over tax breaks for state businesses.
The ministers were not able to bridge differences over how to promote both trade and environmental protection, or close their gap over the conditions for foreign businesses to join public works projects.

In Japan-US talks on tariffs, Japan offered tariff cuts and abolishment on 5 agricultural items, but the US demanded zero tariffs on all items in principle.

The ministers reached agreement on some of the 21 categories being negotiated.

These include foreign business access to telecommunication infrastructure, cooperation on personnel training and technological support in emerging economies, simplification of export and import procedures, food safety and methods for animal and plant quarantine.

We ought to be celebrating, but the state of things is, we haven't got a clue what may be a better deal.