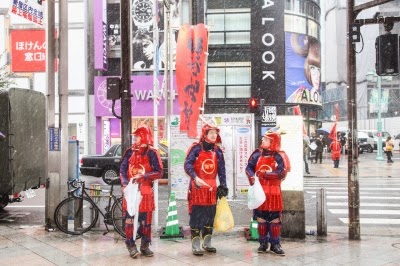 Was planning to watch Gravity today in Shinjuku and met up with Andreas, Swedish high school teacher who is on a very cool Ministry of Education scholarship in Fuchu, which has gone very well (do check your local Japanese embassy in your country to see if you apply!). But Gravity was not showing anymore, in spite of its 10 or so Oscar nominations. Or so I'm told.

While waiting for said Andreas (who is always late) outside the Kinokuniya bookstore, I noticed a guy in a bright red samurai or maybe even shogun daimyo costume, with a flag attached to his back, handing out leaflets.

An unusual sight in central Tokyo, so I got curious.

Turns out there is a low-budget film called The Tale of Iya (祖谷物語) released in 2013 that has gotten a lot of attention abroad, and is now airing in Shinjuku. 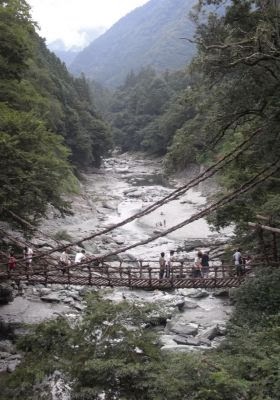 I have been to Iya Valley several times. It claims history back to a thousand years ago, when Heike clan members managed to escape to this desolate place in Shikoku, running away from sure death in Kyoto.

There is even a Biwa Waterfall where it is said that the highly cultured Heike guys and gals gathered, perhaps to regain some of their strength, both mentally and physically. Sorry to say, there is a small restaurant next to it that covers most of the scenery, which seems to have been built a long time ago. But noone ever manages to capture that sorry sight in a photograph...

Iya Valley today is a major tourist location. That is difficult to explain, but stay with me. Sure, it is worth going to, and there are local trains and if you go further, it is absolutely beautiful; rugged mountains and a canyon deep down to the river that is just amazing. Not a building and no humans and nothing but "valley" as I imagine it. Yes, there are small and large onsen, and you can stay and eat well. But what they have done to Iya Valley itself is horrendous. And this is what The Tale of Iya touches on: big part of the story.

It was summer when a stranger from Tokyo arrived at “Iya”, where the riches of nature still abound. This young man, named Kudo, was willing to live his new, self-sufficient life. He was exhausted by city life, and believed this beautiful land would give him some rest. On the contrary, the reality was not as easy as he thought. There was a confliction between a local construction company and a group of nature conservationists. Farmers are trying to save their harvests from harmful animals such as deer and monkeys. People are fighting for their own purposes: to get their job, to save the environment, or to survive.

One day, Kudo met Grandpa and a girl Haruna lives in the heart of the mountains. It was far away from any human habitations. No electricity, no gas, there was nothing but the nature. Their modest and humble life went by slow, and seemed eternal as if time stops.

Every morning, Grandpa climbs up the mountain to go to the little shrine to offer Omiki (sake) to the mountain god. Haruna goes to high school an hour away from home, and after that, helps Grandpa to plow his field. Feeling his heart gradually gets healed, Kudo thought that he finally found what he was looking for in their calm life. Soon Kudo started trying to transform a piece of wasteland into his own field. 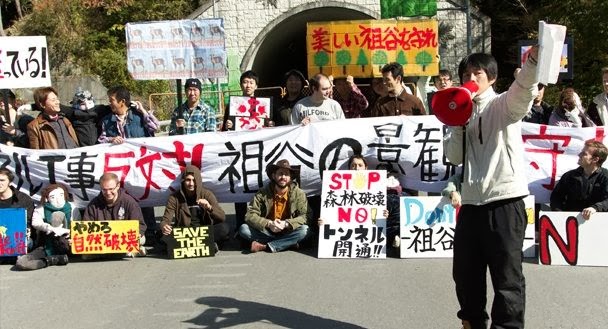 But major tourist location in Japan means: lots and lots of concrete poured and large parking lots for the tour buses. And that more-often-than-not means protests....

The Tourist Center itself isn't terrible, it is just too big, and too tacky. There is a "vine rope bridge" that you get charged 500 yen for walking across, cleverly taking advantage of the fact that there is nothing else to do. Apparently the Heike clan survivors built such rope bridge to get further away from its enemies in the capital. You end up wishing the good people of Iya Valley had managed to pull off something similar, in the 21st century.

And if you stayed with me until here, that is what The Tale of Iya is about.

Central Shikoku is absolutely beautiful, and the people living there are great. Do visit Iya Valley and do go beyond the Tourist Center. There are great walking paths - and did I mention hot springs? And the wonderful people?

More about the film here (E) and blog with lots of photos here (J).

I really liked the idea to promote this unique film with guys not ashamed of dressing up in a bit of red for a bit of fun in the middle of the city of Tokyo!