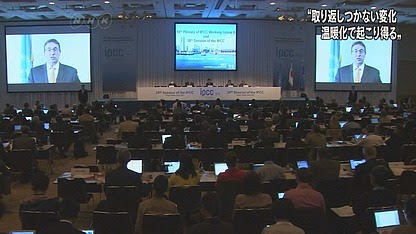 ...with a clear mandate to come up with a report by Monday next week that should outline how climate change will impact the world over the next 100 years.

That includes food and agriculture topics, such as food security issues, that I work on, so I was interviewed by the BBC today in Ueno Park about that. If I like Matt McGrath's report later this week I promise to post a link!

Climate change will no doubt cost Japan dearly. Estimates could be as high as ¥17 trillion (US$176 billion) annually by the end of the century, according to a 2009 report from Ibaraki University, found referenced here.

The study reveals that Japan will have to cope with a range of impacts that could simultaneously:

In a country like Japan whose geography, topography and climate means it has always been prone to serious natural disasters (especially seismic activity and typhoons), people are likely to react with resilience and calm to additional impacts from a changing climate.

Meanwhile, some more background about the ongoing efforts in Yokohama here:

“Atmospheric vapor turns to rain,” explained Akio Kito, chief researcher at the University of Tsukuba. “When temperatures rise, the amount of vapor increases, which makes it easier for large rainstorms to occur.” As for typhoons, most scientists believe that while the total number will shrink, the ones that do happen will be more powerful.

Smaller temperature variances between the sky over tropical seas and the ocean surface weaken the winds and eddies that cause typhoons, which is expected to reduce their number. However, when ocean temperatures rise, the amount of vapor in the atmosphere increases. As typhoons arise from the vapor, they are expected to be stronger when they do happen.