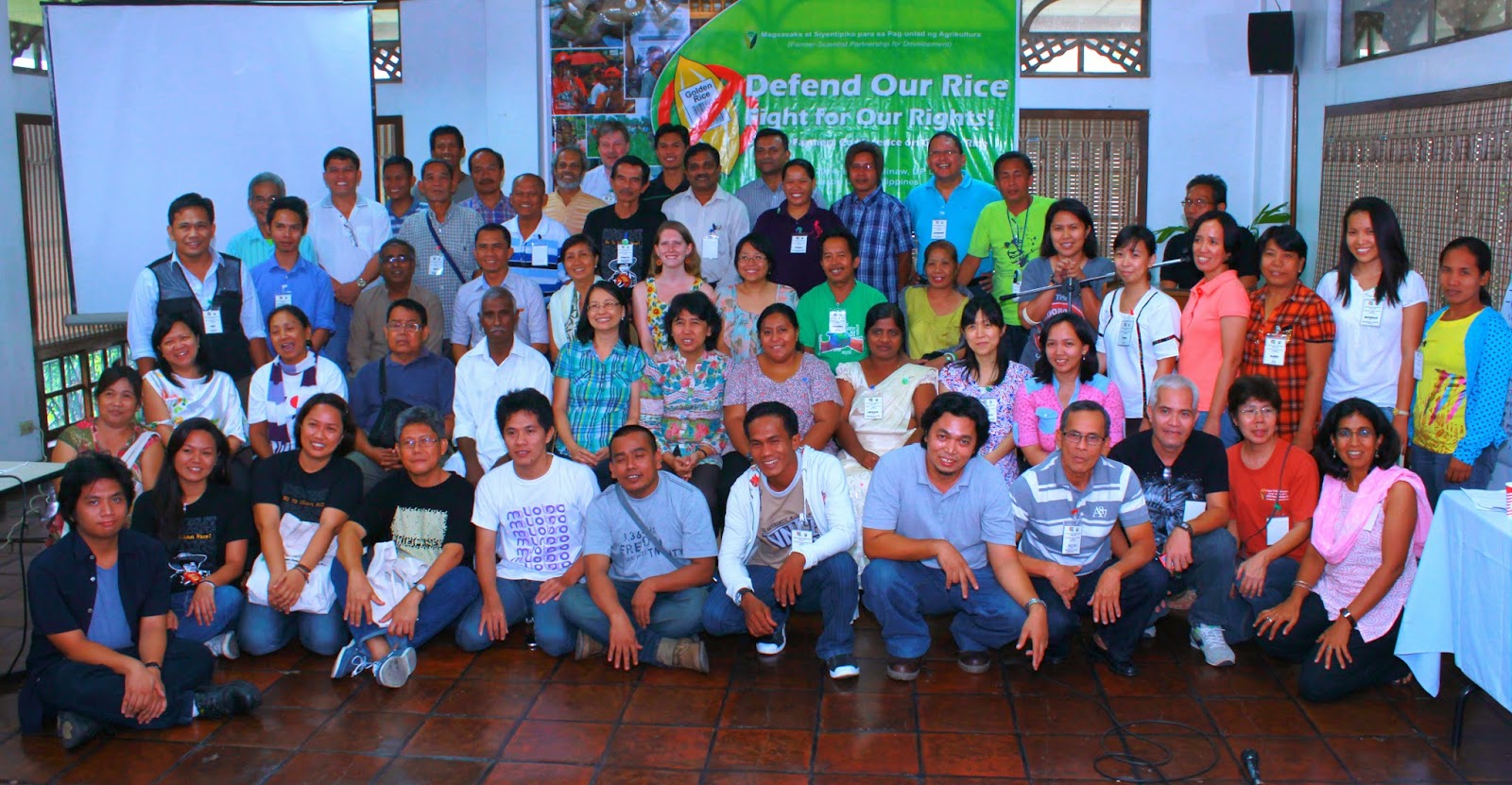 Fight for our rights

Lots and lots of great energy which I think this group photo managed to capture!!

From the seminar 100% agroecology will feed the world

The 15-million strong Asian Peasant Coalition (APC) with members across 9 countries in Asia assailed the new Sri Lanka Seed Act because it will only safeguard Gene giants and not the farmers.
“If implemented, the seed law would undermine the right of small farmers to save, conserve, plant, exchange and sell farm-bred seeds. It will also endanger biodiversity,” the APC said in the statement.
“Seeds and farmers go together. You cannot separate one from each other. Sadly, this new seed law have been created to protect gene giants like Monsanto and Syngenta, and their agents, both local and foreign” said Mr. Chinthaka Rajapakshe, Moderator of Movement for National Land and Agricultural Reform  (MONLAR) based in Sri Lanka. MONLAR is an active member of APC.
“This kind of legislation is being pushed all over the world to ensure “business as usual” for the big seed companies. A similar act is operational in India and in fact, we continuously opposed the bill which will increase the agrochemical transnational corporations (TNCs) control in agriculture and will force farmers to pay royalty on hybrid or genetically modified (GM) seeds,” stated Fathima Burnad, APC Chairperson based in India.
”If we don't know who is selling the seeds, we cannot control their quality," this is the official Indian government line, when arguing in favour of the Seed bill in India. And this, of course, is the same rhetoric used by the seed industry around the world. The same argument is again being used in justifyingSri Lanka’s new Seed Act,” Burnad exclaimed.
“But actually, these Gene giants are only after their interests – to rake huge profits, proven in their track record.  And as long as farmers continue to save and breed their own seeds, it is difficult for seed companies to sell the seeds they produce. In this case, seed laws are the most important tool for them to  either prevent farmers from saving seeds or to force them to pay for farm-saved seeds, thereby compelling  them to buy corporate seeds,” added Rajapakshe.
2013 online news reported that Dupont, Monsanto and Syngenta as the big 3 companies that control the world’s market on seeds. Monsanto is the most concentrated seed player of the three, with 73% of sales coming from seeds and genomics. Syngenta got just 25% of revenue in the first half of 2013 from seeds; the other 75% is from crop protection products. Finally, DuPont gets 29.6% of revenue from its agricultural segment, but that unit includes both DuPont's seed and crop protection business.
“And these gene giants had grown big enough to be able to influence governments in formulating laws, pressing governments to pass legislation that would provide better protection for their proprietary seeds rather than protecting farmers’ own seeds varieties. This is true enough and now evident in Sri Lanka,” remarked Chandra Hewagallage, APC South Asia Coordinator and National Coordinator of Vikalpani National Women’s Federation based in Sri Lanka.
“Not only that, through the World Trade Organization (WTO) and its Agreement on Trade- Related Intellectual Property Rights (TRIPS), the seed industry was able to internationalize their demand to make laws favourable in guaranteeing their intellectual property rights (IPRs), while disallowing the rights of farmers.  The process began in 1995, where many Asian governments who are members of the WTO had been obliged to comply with the TRIPS Agreement. This meant that the governments were required to enact laws to provide IPRs that eventually lead to monopoly control of seed & planting material development by agrochem TNCs,” Burnad explained.
Rajapakshe clarified that, “patents on seeds and genetic resources for food and agriculture threaten sustainable farming practices. Seed patenting is equal to stealing of our traditional knowledge and resources we have nurtured and conserved over generations.”
Hewagallage added that, “this Seed Act will ease entry of GM crops with the possible contamination of traditional varieties being propagated in Sri Lanka for generations. In the proposed Seed Bill of India for example, it does not prohibit the registration of GE seeds.”
“We call on the Sri Lankan government to repeal this proposed Seed & Planting Materials Act 2013. The farmers will not benefit from this seed law!” ended Rajapakshe and Hewagallage.
But above all of these, as APC always asserts, the Asian governments must implement genuine agrarian reform program in order to break the monopoly of seeds by a handful of agrochem TNCs.