Kiko Network is a Japanese NGO with a focus on climate change. They are based in Kyoto and have three people in Copenhagen who are blogging with lots of photos and videos. They were also featured in the major Danish newspaper Politiken. (Photo: Jens Dresling)

Megumi Ito told the reporter that Japan is experiencing more typhoons and rain, and that the cherry blossoms are blooming earlier than in the past. She is hoping that the blog will help other Japanese and especially young Japanese people understand the climate issues.

There are about 50 Japanese NGOs in Copenhagen for the COP15 meeting, a record number. For the first time ever, Japan's government is also letting NGO delegates participate in the government's official delegation. If anyone has information about other blogs by Japanese activists or NGO participants, please comment.

I hope the Friends of the Earth Japan blog will be more active, only three posts so far ;)

The OurWorld 2.0 web magazine joined 56 newspapers in 45 countries that are taking the unprecedented step of speaking with one voice through a common editorial:
Read more: http://ourworld.unu.edu/en/fourteen-days-to-seal-historys-judgment-on-this-generation/#ixzz0Z5FWS6SP
Under Creative Commons License: Attribution Non-Commercial Share Alike

Eco Singapore has a great blog in English, with updates from the different meetings. They are a group of 21 young students from Singapore, with lots of photos here. They noted:

We met with youth from East and Southeast Asia during a caucus session at the Conference of Youth (COY). Compared to the delegations from Europe, the US and Australia, there were very few youth from our region at COY. At the risk of sounding post-colonialist, it was starkly apparent that the youth from the West played a more active and dominant role in the organisation of COY and in the youth climate movement on the whole. Many of the perspectives shared at COY as well as the ideas and issues discussed were viewed from the lenses of our friends and collaborators from Australia, Europe and the US. While they were insightful and thought-provoking, the silence on Asian issues was starkly apparent.

But Asian youth have a huge stake in climate change too.

Well said, and I will check their blog for updates over the next couple of weeks. 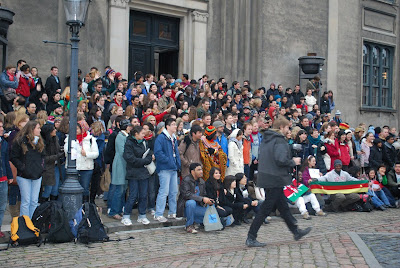