December 10, 2009
Rural Japan, at least in areas near big cities, should focus on sustainable agriculture, food security and solutions that benefit the people who have lived in such areas for a long time. Yet, there is much at stake. Golf courses have been a problem at least since the 1980s, and now we are beginning to hear that many metropolitan residents have no grave to go to. Such a particular Tokyo problem, and Nikkei has more details:

In Tokyo, 18,000 new graves were needed each year for the 20 years up to 2004, but only 8,000 were available annually. There are indications that there will be a shortage of final resting places for the next 50 years or more.

So, 20-30 years ago, farmland and forests were turned into golf courses. Local citizens protested, tried to lobby the government, held meetings and wanted to stop this madness. Let's hope golf courses are not turned into massive graveyards. We need that land for better things, for the living. 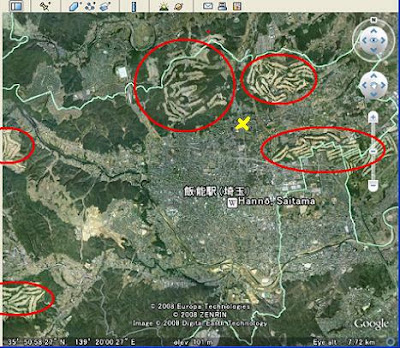 It is one thing to see the road signs and an occasional golfer walk by (most take the special membership-only golf-course buses from the train station). Suddenly, on Google Earth, there was my house (yellow X marks the spot) surrounded by golf courses (red circles)!

One legendary Saitama golf course was first opened back in 1929, designed by Kinya Fujita and renovated by Charles Alison, according to a website called 100 top golf courses of the world. However, a number of environmental scandals involving golf courses came to light in the 1980s, and the government was forced to step in:

In terms of the maintenance of golf links, on the other hand, the utilization of pesticides and chemical fertilizer is commonly made to keep the lawns good in quality, and in recent years there have been mounting concerns about the impacts of pesticides on water in the region. In the midst of this situation, there occurred an accident in which "yamame" (Onchorhynchus masou) and other fish in Hokkaido's hatch-eries were affected by pesticides improperly sprayed at an upstream golf link in November 1989.

The Global Anti-Golf Movement was launched on World No-Golf Day (April 29, 1993) by Mr. Gen Morita, following a three-day conference on Golf Course and Resort Development in the Asia-Pacific Region in Panang, Malaysia from April 26 to 28, 1993. The three sponsoring organizations were the Japan-based Global Network for Anti-Golf Course Action (GNAGA), the Thailand-based Asian Tourism Network (ANTENNA) and the Malaysia-based Asia-Pacific People and Environmental Network (APPEN). Delegates from Hawaii, Hong Kong, India, Indonesia, Japan, Malaysia, the Philippines and Thailand were also present.

I'm lucky, I still have a lot of hills and mountains around me that are in no way at all touched by human development. Yet, at the same time, Google Earth helped open my eyes to the fact that many of our local environmental issues can be close to our backyards, yet not always so obvious.

Where would you like to be buried...? Or do you have other plans?

Nikkei: Many Metropolitan Residents Have No Grave To Go To
farming progress sports