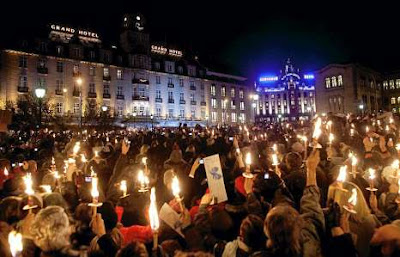 There was a huge anti nuclear weapons demonstration last night in Oslo as US president Obama accepted the Nobel Peace Prize. The demonstration, a torchlight procession, was arranged by a NGO called Nei til atomvåpen ("No to nuclear weapons) and another official slogan was "With Obama for a nuclear weapon free world." Many peace activists from Fredsinitiativet also participated with banners protesting against the wars in Afghanistan and Iraq. Photo gallery here.

However, this manifestation was mostly ignored by media around the world, which I find tragic and disappointing. BBC managed to mention an earlier protest briefly:

Some anti-war demonstrators gathered outside city hall, where the ceremony was held.

"We are protesting against him because... we don't think he is a man of peace," one of them told AFP news agency.

Then, BBC only had this to say about the 12,000-15,000 who gathered for the massive demonstration in the evening:

In the evening, Mr Obama appeared alongside Michelle on their hotel balcony and waved to a torchlight procession below.

If you read Norwegian, you can get more details from Aftonposten or NRK, the government news channel. According to NRK, some people shouted "Obama, Obama" and "Yes we Can" while the more "critical" shouted:

Peace Demonstration December 10th As the US President, Barack Obama, arrives in Oslo to receive the Nobel Peace Prize, the Norwegian Peace Movement stages a grand demonstration. The main goal of the demonstration is to point at the obligations of the Peace Prize. The event will begin at Jernbanetorget square at 6 pm.

The following are the slogans of the demonstration:

# Change: Stop the War in Afghanistan!

# Yes We Can: Control Arms Trade


After their talks, the demonstration will proceed from Jernbanetorget through Karl Johans gate to the south end of Eidsvolds plass, in front of Stortinget (the Parliament building). We will present our message to President Obama, as he appears on the balcony of Grand Hotel at 6.55 pm.

After the event, there will be a free grass-root Peace Concert at Smuget (Rosenkrantz' gate 22).

UPDATE: Survivors of the 1945 atomic bombings of Hiroshima and Nagasaki were disappointed by Obama's speech in Oslo in which he said the use of force is sometimes justified:

"He admitted the use of force while also mentioning a world without nuclear weapons and the speech is contradictory in its nature," Kazushi Kaneko, 84, director general of the Hiroshima Council of A- Bomb Sufferers Organizations, said.

"A-bomb survivors and other civilians need to raise their voices to press the president," he said, adding they need to stop relying just on the U.S. president in promoting the abolition of nuclear weapons.