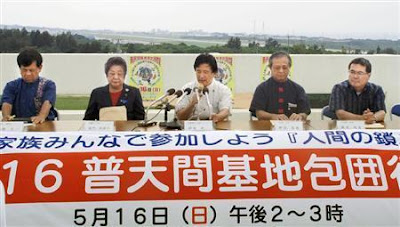 This just in: A massive 13 kilometer long human chain will protest against the Futenma relocation of the American military base in Okinawa on May 16, 2010, according to Sankei.

Mayor Youichi Iha told a news conference on Tuesday that people in Okinawa Prefecture want the central government to negotiate with the US to remove the bases from Okinawa...

The people of Ginowan and other municipalities accommodating US bases, together with peace activists, plan to surround Futenma Air Station with a human chain on Sunday to demand its removal. The event's organizers are calling for more than 30,000 participants, as the air field has a circumference of 11.5 kilometers.

So, who will profit from the proposed relocation to other parts of Okinawa, as part of the failed and flawed deal made between the now ousted Bush government and Japan's extinct Liberal Democratic Party back in 2006?

One proposal is a "piling" option, to drill thousands of metal pipes into the environmentally sensitive coastal area near US Camp Schwab, at Henoko beach.

This is from an article that appeared in Shukan Kinyobi, October 25, 2002.

The Feud Behind the Scenes: Relocation of the US base on Okinawa, by Abe Takeshi, Okinawa Times:

Construction companies in the land reclamation camp were also bolstering their local offensive, forming a front led by Bechtel, the giant American construction company with close ties to the U.S. government.

Local firms in the pontoon camp who had joined the race for construction contracts as the representatives of "local interests," were now the first to fall by the wayside. With the choice last December of a shoal reef as the construction site, all possibilities ended for building a runway on floating pontoons. At this point, Ishikawa-jima Harima Heavy Industries and several steel companies in the pontoon camp switched sides to the landing wharf camp.

Other large companies mentioned include Shimizu Construction and Shin-Nihon Steel. Mitsubishi is one of the big construction companies, that activists such as Mr. Toyama Sakae, the “mayor” of Henoko Tent Village, say are the main force behind the push for the proposed "helipad" at Henoko, according to History News Network.

Inside the Sit-Ins Against U.S. Military Expansion on Okinawa
By Kikuno Yumiko

But the most likely contender may be Bechtel, and John W. Dower notes that it is a small wonder that cries of "Go Home Quickly" have begun to fill the air:

Access to oil, lucrative reconstruction contracts and ideological agendas of sweeping "privatization" have become entangled -- and inevitably so -- with talk about the spoils of war. The perception of war profiteering is in the air, compounded by the taint of a crony capitalism that reaches into the highest circles of American lobbyists and policy-makers. (The U.S. government, for instance, recently awarded a huge reconstruction contract to Bechtel, which has close ties with the Republican Party.) 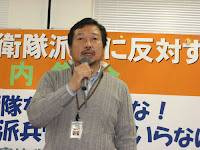 Shigeru Handa, chief editor of Tokyo Shinbun and analyst of military matters, thinks Bechtel is one of the main pushers behind the current Okinawa troubles. On December 15, 2009, he spoke about the Futenma relocation issue to Peace Forum.

Reclamation at Camp Schwab, in particular, is the preferred route for companies like Bechtel, while some 17 or 19 other iron makers and shipbuilding companies are bidding for the piling option, according to Shigeru Handa.

(Thanks Makiko Sato for that link!)

What worries me more is what they will put on these helipads. These are not ordinary helicopters. Bell/Boeing are making these monsters, the V-22 Ospreys.

Kyodo News briefly mentioned the V-22 Osprey that the American Marines want to deploy at Futenma, Henoko (or Yanba Forest for "jungle" warfare practice or Tokunoshima in Kagoshima Prefecture) but never talks in detail about them, and I have not seen any reports on Japanese television either. The role of private profit making corporations are unclear in the 2010 battle for Okinawa.

So, do you have any idea what kind of expensive aircraft/helicopter this is?

Video (sorry for the terrible heavy metal music, do turn it down)
http://www.youtube.com/watch?v=Gbne0ooG-qk

The Osprey takes off and lands like a helicopter but flies like an airplane. It is made by Bell/Boeing for assault support with tilt twin rotors. It has had several serious accidents. The Marines who know how bad it is call it the "widowmaker."

It has been grounded several times and to this day, there are some in congress who vilify it as a boondoggle, a death trap and widowmaker and that its time to end the Osprey program once and for all.

"An aircraft with a controversial past, a troubled presence and an uncertain future," Rep. Edolphus Towns (D) of New York said.

A new book by author Richard Whittle alleges everyone from congress to defense contractors and Marine generals found amazing ways to keep the program alive.

“A salesman is got to dream, boy. It comes with the territory.”

Where he was and what he was doing when he first heard the news is seared into Dick Spivey’s memory. The disaster took place in the desert near Marana, Arizona, at two minutes before eight o’clock in the evening, local time, on April 8, 2000. Spivey’s brain stores that data alongside November 22, 1963, and September 11, 2001, in the lobe reserved for devastating events. “For me, that’s the same kind of thing,” Spivey explains in a native Georgia drawl seasoned with an acquired Texas twang.

When it happened, Spivey was 5,300 miles and seven time zones away from Marana, lying in bed in his room at the Thistle Hotel Victoria in central London as the sun rose. Barely awake, he was listening to, but not watching, a morning television news broadcast. The Thistle Victoria, a somewhat timeworn but convenient pile of stone and faux marble attached to the city’s throbbing Victoria Station rail terminal, is mostly an affordable place to flop for tourists. Spivey, a fifty-nine-year-old aeronautical engineer-turned-marketer for Bell Helicopter of Fort Worth, Texas, was there because the hotel was the site of an aviation conference that Monday. He and a U.S. Marine Corps general were to speak there about a peculiar aircraft Spivey had helped sell the Marines on two decades earlier. It had been the service’s top priority ever since.

The aircraft was the V-22 Osprey “tiltrotor,” called that because it tilts two giant rotors on its wingtips upward to take off and land and swivels them forward to fly fast. The tiltrotor was Bell’s solution to an engineering challenge that had tantalized inventors and engineers and industrialists and the military since the 1920s: how to build a vehicle able to take off, land, and hover with the agility of a helicopter yet fly as fast and far as an airplane. Spivey had had a hand in designing the tiltrotor in his engineering days. Since becoming a marketer in the 1970s, he had promoted it to anyone who would listen. But Dick Spivey was not just a salesman with a product, he was a salesman with a dream. Spivey expected the tiltrotor to change the way people fly as much as the jet engine had—and the jet engine had changed the world. That’s what Dick Spivey told people all the time, and that was what Dick Spivey believed.

Truthout
A Simple Way to End This Recession...Forever
May 9, 2010
http://www.truthout.org/a-simple-way-end-this-recession-forever59282

I hate the Osprey, and have ever since they were introduced by Bell-Boeing and started killing Marines, who, by the way, call the thing "the widowmaker." Local reporters who were allowed to take a flight in the things had to sign all manner of releases before they took off, just in case one of them crashed again. An Osprey crash in Afghanistan killed four people just last month, in fact. The things don't work, and watching them skim the roofs in my neighborhood made me want to run and hide. I half expected one of them to go sideways and crash into the Hancock building. It really wouldn't have surprised me.

The V-22 Osprey is unfit for combat and needs to be scrapped altogether, according to a new report from a defense think tank.

The Center for Defense Information report, titled "V-22 Osprey: Wonder Weapon or Widow Maker? They warned us. But no one is listening," includes nearly 50 pages of text sharply criticizing the tilt rotor's combat capability and lack of testing.

So, ladies and gentlemen, dear long-suffering Kurashi-readers, member of the blog-reading jury: From 1991 to 2000 there were four significant crashes, and a total of 30 fatalities during testing. In 2000, there were two further fatal crashes, killing a total of 19 Marines, and the production was again halted while the cause of these crashes was investigated and various parts were redesigned. There has also been a scandal of falsification of safety records. With the first combat deployment of the MV-22 in October 2007, Time Magazine ran an article condemning the aircraft as unsafe, overpriced, and completely inadequate... CNN covered the recent crash in April 2010 in Afghanistan that murdered 4 more people. At least 34 lives lost in total, perhaps more.

"Defence is the name, attack is the game..." (Truly funny 2003 UK comedy, a Bremner, Bird, and Fortune special 'Between Iraq and a Hard Place')

Pandabonium said…
The Osprey is indeed a deadly boondoggle.

I am less worried about the type of aircraft deployed than the continued presence of US troops of any service in any form in Japan.

I would not care if they had a perfect flying safety record, perfect driving records, stayed stone sober, and had a zero crime rate.