Okinawa: Joint Statement by Mayors to Oppose the Construction of Futenma Replacement Facility within Okinawa

May 24, 2010
I just have to add this to Kurashi, I think their strong concerns need to be better understood. By the way, there are demonstrations all over Japan: peaceful groups of people who will not accept the usotsuki うそつき (lying) of the elected politicians. Time for honesty and frank dialogue. How refreshing. Non-violent protests, from sincere people with no wish whatsoever to continue host American military bases. Other Japanese bloggers are of course truly angry.

(Issued on the day of the Futenma Human Chain Campaign, May 16, 2010)
More over at Peace Philosophy Centre 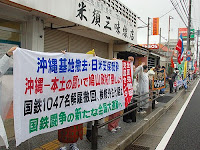 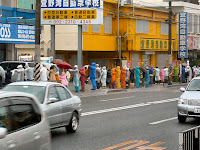 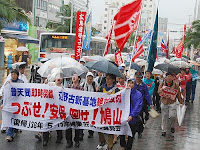 Over fourteen years have passed since the Special Action Committee on Okinawa (SACO) agreement was concluded by the United States and Japanese Governments. In this agreement, both governments promised to return the entire land of the US Marine Corps Futenma Air Station, located in the middle of heavily populated Ginowan City, within five to seven years. However, both governments have failed to implement the agreement, and as a result, Futenma Air Station still remains within the city as it was fourteen years ago.

The initial goal of the SACO agreement was to ensure safety of the people of Ginowan by removing the dangerous Futenma Air Station, which produces enormous aircraft noises and poses constant risk of an aircraft crash. This also includes reducing the burden on the people of Okinawa caused by disproportionately concentrated US military bases on this small island.

In the SACO final report in December 1996, however, both US and Japanese Governments set terms that the land of the air station should be returned after a removable Futenma replacement facility, with a 1500-meter runway, was constructed within Henoko, Nago City on the east coast of the main island, Okinawa. This decision greatly disappointed the people of Okinawa.

Although Nago citizens expressed their opposition against the relocation of the air base in a referendum in December 1997, the former Liberal Democratic Party(LDP)-led administration divided citizens by using a carrot-and-stick policy, which consisted of offering government subsidies in return for cooperation with the wills of US and Japanese Governments. As a result of the LDP policy, an unhealthy and tense situation developed in the local community.

“Ojii and Obaa” (grandfathers and grandmothers) in Henoko, backed by various supporters, have continued a sit-in campaign, against the construction of the Futenma replacement facility, for their children and grandchildren for fourteen years. This prolonged sit-in has effectively blocked progress on the project. 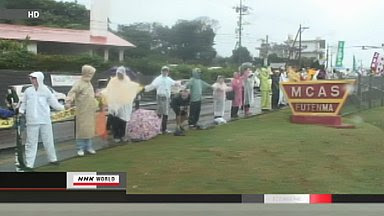 In the Nago mayoral election this past January, a candidate, who pledged not to allow the construction of a new US military base either on land or sea, was voted into office. Nago citizens, in this election, showed their strong will to fight against the relocation of Futenma Air Station within Okinawa. A majority of Okinawan people were encouraged and proud of the election result, which paved the way for a unanimous decision by the Okinawa Prefectural Assembly to hold the “4. 25 Kenmin-Taikai” (April 25th prefecture-wide rally) in order for the people of Okinawa to express their unwavering clear opposition against the Futenma base relocation within Okinawa.

We have no other recourse than to retrieve the peaceful island life without military bases for our citizens, as well as for the future of Okinawa. To this end, we have decisively concluded that there shouldn’t be any new US military bases constructed within the prefecture. Okinawa is a small island consisting of only 0.6 percent of the total land mass of Japan. Further new construction of military bases shows complete disregard for the human rights of this small community, who have unwillingly hosted the US military for over 60 years. There is also total disregard for the environmental impact which would fatally disrupt the habitat of the endangered Okinawa Dugong in the beautiful ocean surrounding Okinawa.

The danger-plagued FAS should be removed without any delay from Ginowan City. Both governments must prioritize safety and security of the people of Okinawa by abandoning the project and not continuing to promote Okinawa as being essential to regional security and a deterrence to regional threats. We will step up for calling for the removal of dangerous military air operations from Futenma Air Station and immediate closure and return of the base.

Now, we announce our strong resolution to oppose any plan on the base relocation within Okinawa, including the Hatoyama administration plan currently nearing completion. The Japanese Government should review and see the real picture of the plan on the relocation of 8,000 Marines from Okinawa to Guam, and strongly negotiate with the US Government regarding the immediate and unconditional closure of Futenma Air Station.

The Ginowan and Nago City Governments used today’s event to continue working hand-in-hand and cooperate in voicing opposition to the base relocation within Okinawa.

(Photos from bloggers based in Okinawa, including 沖縄ちゃんぷる, 革命的共産主義者同盟全国委員会, as well as Press TV, and NHK.
Okinawa politics US military bases