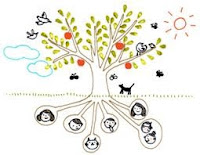 City Halls are rather big affairs in Japan, but locally, if you live here, you must have a community center or citizens hall nearby. Most likely, if you are like me, you have never set foot in the place.

I am told they serve as a gathering place (shelter) in time of disaster, and is used for recycling activities, giving rabies vaccines to dogs, education talks, community planning talks, etc. (Thanks P)

You can google using the kanji of your town name, and add any of the above, and see if there is a local hall or center near where you live. 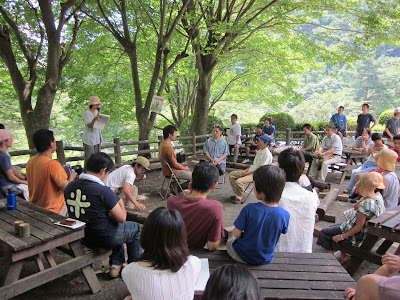 I got to wonder about how to go about all of this after watching the transition town dvd from the UK, called In Transition. There are cases of local communities that have started to think about how to respond proactively and creatively to peak oil and climate change, "seeing them as a historic opportunity to build the world anew..." Could I actually make that happen in my small town...? Suda 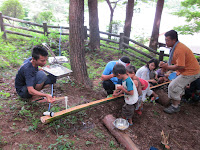 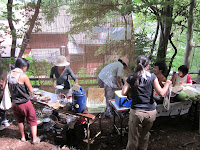 In Transition 1.0
From oil dependency to local resilience

If you get the dvd, you can also watch Hidetake Enomoto speak about Transition Japan.

They have a focus on 3 communities that had nominated themselves to become Transition Town pioneers in Japan. They are Fujino, Hayama and Koganei City.

Another way going about it is being tried in Järna, Sweden. From
Transition:

...towns in Europe and even the U.S. are creating local communities that support local food, business, energy, labor, supplies, and even local currency. These are known as Transition Towns. If you want to get a good overview of what this movement is, please read the description HERE, and view the following short video.

Michael Lusk from Sweden contacted me the other day. He is a member of a “core group of seven people who are working to establish transition culture locally.” I asked him if he could tell me a little about this “transition culture” that he is working on, and he has this to say:

The transition idea began around five years ago in Ireland and England as a community-based response to peak oil and climate change. Its leading text is permaculture designer Rob Hopkins’ book The Transition Handbook.

The transition movement is a large-scale self-organizing social experiment whose participants bring a great diversity of interrelated concerns revolving around local resilience. There are indications that restoring local food security is becoming the movement’s primary short-term goal. Local monetary systems are also very important both as a practical measure promoting economic stability and as a means of restoring sovereign power to the people.

The transition movement is growing quickly and is already well established in the US: http://transitionus.ning.com/.

Our initiative is the first transition initiative in Sweden – although we’re linking with several organizations, which have been doing aspects of transition work here for many years and also Greenpeace Sweden, which is leading the fight against GMOs in our country. Our group met for the first time around two months ago. The initiative is still in the consciousness-raising stage. That’s why we’re on the lookout for public speakers right now. We don’t have a page at transitionnetwork.org yet – for the moment you just have to mail us individually.

So, whether the motivation behind these communities is to address climate change, peak oil, to be able to eat healthy, non-GMO food in the middle of a depression, or to just plain get away from big government and scale down to a local level, the foundation is good. We need to combat rampant globalization with localization. This means taking responsibility for changing our lives drastically for the good. The more localized we are, the more resilient we become when the bottom completely drops out of the economy. If we are not dependent on getting our food from another country, or even 1000 miles away, we will eat when the trucks stop running. If we look to the neighbor’s kids to do the chores that we cannot do ourselves, and pay him/her with a form of local currency that can be cashed in for tomatoes at the local food stand, or for Sterling like the Totnes Pounds, we are sustainable. We become resilient. We will survive.

Remember; even if we do not all agree on every little thing, we can still come together in a common goal of survival. Join the movement to localize. Let this movement become the driving force of an alternate economic solution to a growing era of increasing debt. Are you ready for a change? Lokalisera dig! Localize yourself! NOW!