Edo: What Did People Actually Eat When There Was No Food? 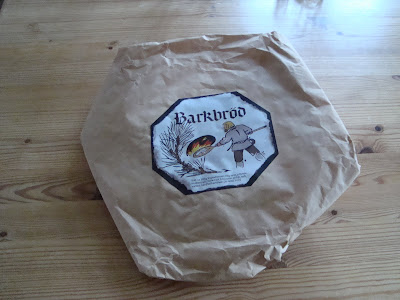 What did people eat in Edo era Japan, when there was no food available? In Sweden we have the word barkbröd, the bread made of the bark of trees. It was a way of harvesting the thin layer of C-vitamin rich phloem, the innermost layer of the bark (from the Greek word φλόος (phloos) "bark".

The phloem is concerned mainly with the transport of living organic material made during photosynthesis. These are the cells that transport the sap, and movement occurs by bulk flow; phloem sap moves from sugar sources to sugar sinks. A sugar source is any part of the plant that is producing or releasing sugar. (Isn't wikipedia amazing?)

Somehow, people used to be aware of this. However, the word barkbröd has come to mean poverty, as in a memory of the past, something to be ashamed of.

Now, I find out that in Sweden, they are making and marketing barkbröd, again. This time with a label and a price tag. Photo: Authentic, 2010-made bark-bread from Blomsterstugan i Hedemora, Sweden.

And as of today, there’s also the Stone Oak, or マテバシイ in Japanese. It’s evergreen, hearty, upright, sprawling, majestic, and has nuts very similar to but bigger than Standard Oak acorns. Below you see a variety of acorns, the tallest (second from the right) being that of Stone Oak... 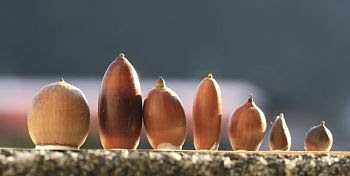 If anyone’s interested in Acorns as a source of food, check this out: Acorns – From Mush to Candy

I like the photo he found of acorns. Yes, they come in all kinds of shapes and forms. That's the good news.

What did people eat in Japan in times of poverty? Rice was not abundant at all. The peasants that farmed rice had to pay most of it as taxes. They mostly survived on vegetables and barley, and some types of 麦 mugi, and whatever fruit was in season.

Last week I found some lovely green barley growing by the Tama River -- in a "silver" garden. This is an excellent idea: a patch of land where elderly, or "silver-haired" people without gardens can grow their favorite flowers and vegetables. Unfortunately, there was no skylark singing, but the barley, as the poem implies, was doing its utmost to gather greenness in its heart. Barley, like millet, was the poor man's substitute for rice in Japan, and it also provided a refreshing drink in the form of mugi-cha (roasted barley tea). In England, barley was used to produce malt for another daily drink -- beer.

Quoted from The Japan Times, back when Linda Inoki wrote about the wonders of Japan's plants and cultural heritage...

They ate fish, and very little else from mammals. Here is a map of the special vegetables grown in Edo (and still now in Tokyo) to feed the shougun and the inhabitants of Edo castle and the whole town. 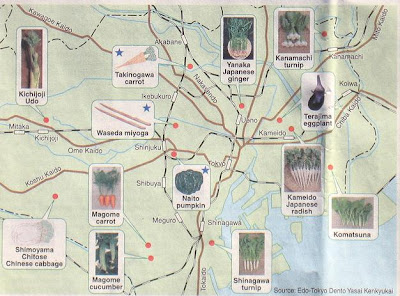 The recent trend to celebrate traditional vegetables is good news, but many of them are rather new, if you look more closely at what farmers did grow in the Edo era or before that. If you live in Tokyo, you are familiar with the area called Myogadani, near Waseda, are you not?

Myōga (茗荷) or myoga ginger (Zingiber mioga, Zingiberaceae) is an herbaceous, deciduous, perennial native to Japan that is grown for its edible flower buds and flavorful shoots. Flower buds are finely shredded and used in Japanese cuisine as a garnish for miso soup, sunomono and dishes such as roasted eggplant.

Thanks Shizuoka Gourmet! You are now one of my favourite links!

Myogadani is a station on the venerable Maronouchi subway line: Can you imagine that there were actually farmers there, in central Edo, who proudly supplied ginger to the city? Gari, sweet pickled ginger was an important part of the sushi that developed as a signature dish of the ancient capital of Japan... And did you know that wasabi has anti-microbial properties and may have been the reason why hords of Edo citizens did not get food posioning from their servings of raw fish? 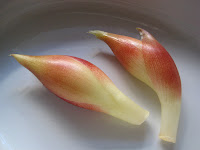 Myoga image from A Radiused Corner - My Internet Bento Box

Fresh wasabi is often served at soba resturants. And you have to grind the root yourself.

The burning sensations of wasabi are not oil-based, thus they are short-lived compared to the effects of chili peppers. The sensation is felt primarily in the nasal passage and yes, it can be quite painful depending on amount taken.

A small amount, with some soy souce, is all you need.

Tiny amounts of original flavour, making your meal that much more worth the effort. 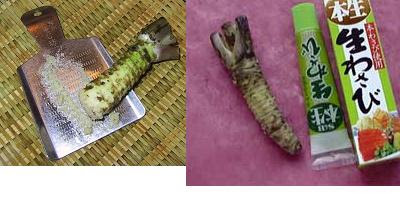 I remember studying acorns as food when I lived in southern California. Unfortunately for the Native Americans of some areas, they only had granite to use for a grinding bowl, which resulted in bits of rock in their food that was very hard on their teeth.

I've never tried eating acorns, but the shrine near us has many big oak trees and there are always plenty of acorns on the ground. Perhaps I'll experiment with some.

Anonymous said…
Seconded, neat post. Interesting to see an old ag-specific map from Edo, and I want to try that Swedish bark-brod !

Shrines are great scavenging spots in urban and even semi-rural environs, aren't they ? Everything from acorns to ginkgo nuts to more notably, pine needles, which contain Vitamin C, the most concentrated in new shoots in the spring... (cold steep a tea for some Vitamin C.)

Back to Stone Oak trees, I've learned that in Japan they're marketed and sold by and large as a hedge plant, because apparently they take well (don't die) to heavy pruning. In a word, the tree is a thriver. It also sets copious amounts of big acorns, which apparently the Japanese used to eat a lot of.