Kokuyo Gets Rid Of Office Products That Are Not Environmentally Friendly

Small steps are often the best way to get to a bigger result. Stationary product maker Kokuyo launched a clever labelling campaign in 2007, clearly telling consumers which products in their massive catalogue they considered "so-so" from an environmental point of view. The label, Eco X Mark, was printed in bright red and the goal has been to eliminate such items by the end of 2010.

Through hard work, they have announced that their campaign is a success, according to Sankei. Kokuyo's 2011 catalogue will have zero products that carry the Eco X Mark, compared to 76% of the stationary products in the 2009 catalogue. In the process of looking at the entire supply chain, they have not only gotten rid of toxic chemicals such as formaldehyde but also managed to reduce CO2 emissions. They inspected 100 paper mills around Japan to make sure that they really recycle the pulp to the extent that is written on the label. 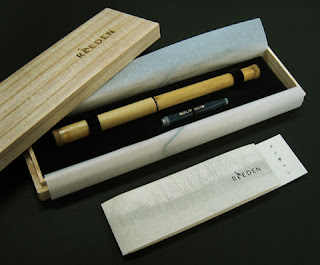 A number of new and environmentally friendly products have also appeared, such as their special notebooks and calligraphy brushes from a CSR-project they are doing at Lake Biwa near Kyoto, called Re-EDEN.

In 2008, Japan For Sustainability noted:

I'm sure many of my Kurashi readers are using a Kokuyo notebook or other stuff. Isn't it great when companies help consumers to make intelligent choices, but even more, they actually get rid of the products that have no role to play on a finite planet, with limited resources, and not enough time for every individual to figure out what to buy or what not to buy...?