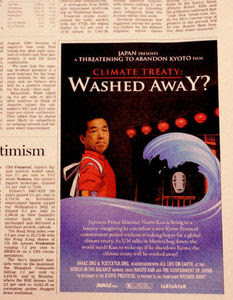 Japan did everything it could to block progress at the United Nations COP16 climate change meeting in Mexico, but others prevailed. Hours ago, a deal was forced through and "the ghost of Copenhagen" has been officially declared dead. Which is (kind of) good news, all things considered. As I noted a year ago, there was No Real Deal In Copenhagen...

These are the two main documents that are considered the outcome:

Under the Kyoto Protocol, 37 countries commited themselves to a reduction of four greenhouse gases: (carbon dioxide, methane, nitrous oxide, sulphur hexafluoride) and two groups of gases (hydrofluorocarbons and perfluorocarbons).

Japan has been opposed to further emission cuts under the Kyoto Protocol - and was seen as blocking concrete progress, alongside the US, that was also preferring a weak agreement.

On Friday, things looked particularly bleak. Leadership? You must be joking. According to NHK World:

Prime Minister Naoto Kan has told UN Secretary General Ban Ki Moon that Japan opposes the extension of the Kyoto Protocol on global warming. The 2 leaders talked over the phone on Friday, at Ban's request.

The conversation took place as the UN climate change conference in Cancun, Mexico, remains divided over the form of a successor agreement to the Kyoto Protocol, which expires in 2012. Ban said he expects Kan to exercise his leadership to help the conference reach an agreement.

Kan replied that Japan cannot accept the extension of the protocol. But he said he will instruct the Japanese delegation to maintain close cooperation with other delegates.

Quite shameful for Japan, although local NGOs here, like Kiko Network have been rather active, and deserve some credit for keeping the topic on the agenda. They note, for example, that among Japan's major 14,710 factories and other "specified facilities" some 150 are responsible for a whopping 50% of Japan's emissions. That figure includes 84 power plants and 16 steel plants.

Kiko Network thinks there is still room for improvement here in Japan, as not all facilities are as energy-efficient as they should be: "In order to introduce appropriate incentive measures, data acquisition and transparency of information is essential," says Kimiko Hirata, director of Kiko Network.

You can read the official statements of each country at the Cancun meeting here:

There seems to have been no statement by China, the world's top emitter of the gases (including CO2) that cause the global problems we know as climate change or global warming. My hunch is that if Japan really took the lead, China would also feel the need to play ball, seriously. But with massive coal deposits, and an increasing need for oil imports from the Middle East, maybe China just has no idea what to do. Japan, meanwhile, has wasted a great opportunity to go that extra mile and come up with original ideas that might help the international community solve a very difficult diplomatic dilemma. 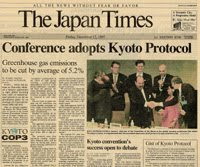 
Fail, in every sense.

The Guardian had stellar coverage of events, up to the last moment:

Cancún climate change summit: The final day as it happened

UN talks in Cancun have reached a deal to curb climate change, including a fund to help developing countries.

Nations endorsed compromise texts drawn up by the Mexican hosts, despite objections from Bolivia.

The draft documents say deeper cuts in carbon emissions are needed, but do not establish a mechanism for achieving the pledges countries have made.

Some countries' resistance to the Kyoto Protocol had been a stumbling block during the final week of negotiations.

However, diplomats were able to find a compromise.

Delegates cheered speeches from governments that had caused the most friction during negotiations - Japan, China, even the US - as one by one they endorsed the draft.

BBC environment correspondent Richard Black said the meeting did not achieve the comprehensive, all-encompassing deal that many activists and governments want.

But he said it was being "touted as a platform on which that comprehensive agreement can be built".

Mexico's President Felipe Calderon said the summit had allowed leaders to "glimpse new horizons" where countries had the "shared task to keep the planet healthy and keep it safe from [humans]".

Under the Treaty, countries must meet their targets primarily through national measures. However, the Kyoto Protocol offers them an additional means of meeting their targets by way of three market-based mechanisms.

The Kyoto mechanisms are:

Under the Protocol, countries’actual emissions have to be monitored and precise records have to be kept of the trades carried out.

Registry systems track and record transactions by Parties under the mechanisms. The UN Climate Change Secretariat, based in Bonn, Germany, keeps an international transaction log to verify that transactions are consistent with the rules of the Protocol.

Reporting is done by Parties by way of submitting annual emission inventories and national reports under the Protocol at regular intervals.

(Top image of an movie-poster look-alike ad placed by Avaaz and Tcktcktck in The Financial Times, portraying Japan as going against the wave of countries that wanted a deal to be reached in Mexico. Maybe this helped to catch the attention of Prime Minister Kan - pictured as a low-budget anime movie villain. Japan did not, in the end, elect to say no to the Cancun concensus. "Washed Away" is of course a pun on the great Ghibli film, "Spirited Away." Read the text of the ad over at Avaaz and Tcktcktck.)
Climate change Kyoto Protocol NGO