In spite of this, the Japanese Prime Minister Abe Shinzo and his Liberal Democratic administration are maneuvering to distort the pacifist constitution by revising Article 9. This coincides with dangerous moves to justify Japan's former invasion and colonization of countries across the Asia Pacific region. In the face of these threats, many peace-loving Japanese citizens have joined together to oppose this constitutional revision, and are working to spread the value of Article 9 around the world. While there may be some Japanese politicians who have appalled the world with statements that approve of war-time slavery, the Japanese people do not approve of these statements. The movement to protect human rights and peace is spreading across Japan, and has forged links with youth activists, and others campaigning for nuclear weapons abolition, to end end nuclear power after the Fukushima disaster, and to protect employment, education and living standards. 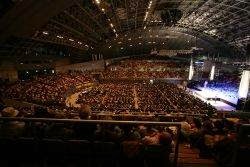 After the great success of the Global Article 9 Conference to Abolish War of May 2008, which attracted 30,000 participants, the Global Article 9 Conference in Kansai 2013 will be held in Osaka in October 2013. We ask you to consider attending, and further cooperation not only in preventing constitutional revision but also in together spreading Article 9's message of peace around the world.

Co-Initiators of the Global Article 9 Conference in Kansai 2013

Pandabonium said…
I find Abe's thinking about as deep as his pocketbook. He is the tool of industry. He will raise taxes on the lower income people through the excise tax, join the TPP which also only benefits large corporations, and is pursuing a monetary policy which destroys the yen in order to again favor corporations who can sell their goods due to the exchange rate, while punishing the people by making imports more expensive and eroding the savings of retired people (like me!).

The changes to Article 9 are not only dangerous in terms of world peace, but once again benefit big business since they will getting orders for expensive military hardware and support contracts for units sent overseas.

One would have to be blind not to see what is going on here. He uses jingoism against Chine and others to attempt to garner support for his plans. Why he seems to succeed in getting support indicates how ignorant people are. I hope they can wake up in time.
9:52 pm, October 14, 2013

Pandabonium said…
Sorry for any errors in my above comment, but this situation makes me rather angry.
9:57 pm, October 14, 2013

Pandabonium said…
Abenomics is working! I went shopping today and the package of pancake mix I buy now has 3 pre-measured packets instead of 4. Same price. A huge price increase in reality, but the same price per purchase. F*** me harder! This is supposedly a good thing according to Abe. Destroy the currency so that the zaibatsu can sell more abroad (and the average person pays more for everything).

As Bugs Bunny used to say "What a Maroon!"

Martin J Frid said…
While all you guys say may be true, there is also a strong sense that:

The movement to protect human rights and peace is spreading across Japan, and has forged links with youth activists, and others campaigning for nuclear weapons abolition, to end end nuclear power after the Fukushima disaster, and to protect employment, education and living standards.
11:59 pm, October 15, 2013