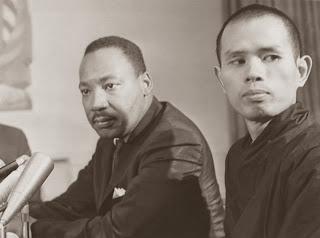 Gentlemen:
As the Nobel Peace Prize Laureate of 1964, I now have the pleasure of proposing to you the name of Thich Nhat Hanh for that award in 1967.
I do not personally know of anyone more worthy of the Nobel Peace Prize than this gentle Buddhist monk from Vietnam.
This would be a notably auspicious year for you to bestow your Prize on the Venerable Nhat Hanh. Here is an apostle of peace and non-violence, cruelly separated from his own people while they are oppressed by a vicious war which has grown to threaten the sanity and security of the entire world.
Because no honor is more respected than the Nobel Peace Prize, conferring the Prize on Nhat Hanh would itself be a most generous act of peace. It would remind all nations that men of good will stand ready to lead warring elements out of an abyss of hatred and destruction. It would re-awaken men to the teaching of beauty and love found in peace. It would help to revive hopes for a new order of justice and harmony.
I know Thich Nhat Hanh, and am privileged to call him my friend. Let me share with you some things I know about him. You will find in this single human being an awesome range of abilities and interests.
He is a holy man, for he is humble and devout. He is a scholar of immense intellectual capacity. The author of ten published volumes, he is also a poet of superb clarity and human compassion. His academic discipline is the Philosophy of Religion, of which he is Professor at Van Hanh, the Buddhist University he helped found in Saigon. He directs the Institute for Social Studies at this University. This amazing man also is editor of Thien My, an influential Buddhist weekly publication. And he is Director of Youth for Social Service, a Vietnamese institution which trains young people for the peaceable rehabilitation of their country.
Thich Nhat Hanh today is virtually homeless and stateless. If he were to return to Vietnam, which he passionately wishes to do, his life would be in great peril. He is the victim of a particularly brutal exile because he proposes to carry his advocacy of peace to his own people. What a tragic commentary this is on the existing situation in Vietnam and those who perpetuate it.
The history of Vietnam is filled with chapters of exploitation by outside powers and corrupted men of wealth, until even now the Vietnamese are harshly ruled, ill-fed, poorly housed, and burdened by all the hardships and terrors of modern warfare.
Thich Nhat Hanh offers a way out of this nightmare, a solution acceptable to rational leaders. He has traveled the world, counseling statesmen, religious leaders, scholars and writers, and enlisting their support. His ideas for peace, if applied, would build a monument to ecumenism, to world brotherhood, to humanity.
I respectfully recommend to you that you invest his cause with the acknowledged grandeur of the Nobel Peace Prize of 1967. Thich Nhat Hanh would bear this honor with grace and humility.

Pandabonium said…
Namuamidabutsu. His thoughts have inspired me for decades. I can think of no better recipient of a Peace Prize, though I do wonder if the Nobel Peace Prize is worthy of Nhat Hanh considering some of the people they have bestowed this supposed honor upon. The current Pres of the USA comes to mind. What a contrast!

None the less, the interview with Oprah was excellent and I applaud her for doing it and thus bringing his message to a wider audience.

Martin J Frid said…
I really should do a proper post about him:

When Thomas Merton, the well-known Catholic monk and mystic, met Thich Nhat Hanh at his monastery, Gethsemani, near Louisville , Kentucky , he told his students, "Just the way he opens the door and enters a room demonstrates his understanding. He is a true monk." Merton went on to write an essay, "Nhat Hanh Is My Brother," an impassioned plea to listen to Nhat Hanh's proposals for peace and lend full support for Nhat Hanh's advocacy of peace. After important meetings with Senators Fullbright and Kennedy, Secretary of Defense McNamara, and others in Washington, Thich Nhat Hanh went to Europe, where he met with a number of heads of state and officials of the Catholic church, including two audiences with Pope Paul VI, urging cooperation between Catholics and Buddhists to help bring peace to Vietnam.

Martin J Frid said…
Instead, the 2013 Alfred Nobel dynamite inventor award went to (drum roll) for some reason the OPCW established in 1997 to enforce the Chemical Weapons Convention which stipulates to ban the development and possession of chemical weapons, and sets out rules for their destruction.

Now, I hope they can start by doing something about depleted uranium. Isn't that a chemical weapon? Why not?

Pandabonium said…
Why? Because the bully on the block (the American Empire) uses depleted uranium. And the weapon du jour to eliminate belongs to Syria. (and to the insurgency, but we're not allowed to report that)