WTO: You Have No Right To Know Where Your Meat Comes From 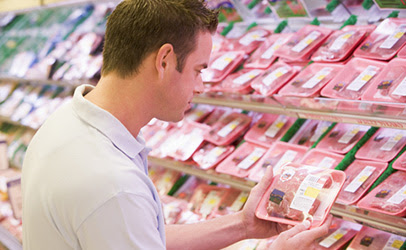 The World Trade Organization (WTO) has ruled in favor of Canada and Mexico in an ongoing dispute with the United States over country-of-origin labeling (COOL) on meat.

The latest U.S. labeling rules, put into effect in 2013, require meat sold in grocery stores to indicate the country, or countries, where the animal was born, raised and slaughtered.

According to a WTO report released on Monday, the labeling rules unfairly discriminate against meat imports and give the advantage to domestic meat products. But the WTO compliance panel also found that the labels do provide U.S. consumers with information on the origin of their food, countering Canada and Mexico’s assertion that the labels do not serve their intended purpose.

The NGO opposition has already made its case, but will the WTO listen?

And, will you listen?

Corporate Trade Agenda Threatens American Consumer’s Right to Know
Washington, D.C.—Today, the World Trade Organization (WTO) ruled that mandatory country of origin labels (COOL) rules for meat and poultry that went into effect in 2013 still ran afoul of the global trade rules. The WTO’s compliance panel decided that the goal of country of origin labels was not trade illegal, but it narrowly found that the implementation of the COOL rules discouraged livestock imports from Canada and Mexico.

“The WTO’s continued assault against commonsense food labels is just another example of how corporate-controlled trade policy undermines the basic protections that U.S. consumers deserve,” said Food & Water Watch Executive Director Wenonah Hauter. “The United States should appeal the ruling and continue to fight for sensible consumer safeguards at the supermarket.”

The WTO has not acted expeditiously on the COOL dispute and the expected appeal will likely drag on well into 2015. The compliance panel began working on this phase of the dispute in September 2013. Although meat industry opponents of COOL and other corporate interests are demanding that Congress take action to repeal COOL, there is no need to legislatively change this labeling program.

“Congress should leave the popular COOL labels alone and not legislate in haste,” said Hauter. “The muddy WTO ruling does not warrant a blunt legislative instrument like repealing or weakening COOL.”

COOL labels were included in the 2002 and 2008 Farm Bills due to overwhelming consumer and farmer support. COOL is required for unprocessed beef, pork, poultry, lamb, goat, fresh and frozen fruits and vegetables, some nuts and seafood. Congress reaffirmed mandatory labeling in the 2014 Farm Bill by adding venison to the products covered by the COOL labels.

Canada and Mexico challenged the U.S. rules for COOL at the WTO in 2008 before the first label was ever applied to a steak or pork chop. COOL didn’t even go into effect until 2009, and those original labels were vague and confusing to consumers, especially the ‘mixed-origin’ labels that were allowed to state for example, ‘Product of USA, Canada.’ Canada and Mexico prevailed in the WTO dispute over the original 2009 rules when the WTO determined that, although the goal of providing information about the source of food to consumers was WTO-legal, the confusing labels did not justify the cost of maintaining information on the origin of livestock.

The U.S. Department of Agriculture (USDA) updated the COOL rules in 2013 to address the concerns raised by the WTO decision by eliminating the misleading ‘mixed origin’ country of origin label for meat and ensuring that each cut of meat displays each stage of production (where the animal was born, raised and slaughtered) on the label. This sensible approach improved the utility of the information consumers receive from the label and allows livestock producers to distinguish their products in the marketplace.

Nonetheless, Canada and Mexico demanded that the WTO reject the new COOL rules and today the WTO recognized that although the new rules attempt to fulfill a WTO-legitimate regulatory objective and were more accurate, it found that the new labeling regime still did not appropriately balance consumer information with the regulatory costs. It suggested that the rules were not specific enough (by not clearly specifying that imported livestock fed in the United States also were fed for a portion of their lives in the country where they were born) and highlighted the preposterously unlikely scenario of consumers being mislead in the event that livestock were raised in multiple countries before being imported to the United States. These dubious limitations on consumer information provided the basis for arguing that the new COOL labels did not provide sufficiently accurate information to justify the cost of the rule.
“People have the right to know where the food they feed their families comes from. It is nonsensical that a label that lets consumers know the origin of their food is a trade barrier,” said Hauter. “Congress and USDA must stand up to the WTO and maintain the existing requirements for country of origin labeling.”

This trade dispute also highlights how corporate special interests can use the WTO to evade democratic governance. For the last fifteen years, the U.S. meatpacking industry has tried to prevent consumers from knowing the source of their food. The industry opposed COOL in the Congress, the executive branch and the courts but COOL has survived the special interest attacks. This year, the meatpacking lobby sued to block the 2013 COOL rules and lost their legal case at the U.S. District Court, U.S. Court of Appeals and even a further en banc panel of Appellate jurists. The meatpackers also tried and failed to repeal COOL during the 2014 Farm Bill debate.


Food & Water Watch works to ensure the food, water and fish we consume is safe, accessible and sustainable. So we can all enjoy and trust in what we eat and drink, we help people take charge of where their food comes from, keep clean, affordable, public tap water flowing freely to our homes, protect the environmental quality of oceans, force government to do its job protecting citizens, and educate about the importance of keeping shared resources under public control.

All meat production has always been safe and still is, right..?

Pandabonium said…
So glad I educated myself about animal based food products and no longer eat any of them. Even when done "properly" - clean, organic, etc - animal food products are not what our human bodies evolved to thrive on and animal proteins are in fact harmful. We are descendants of arboreal creatures and everything in our physiology indicates that a whole foods plant based diet works best. Yes, we can survive on animal products if nothing else is available, but for optimum health, eat plants. And doing so sidesteps all of the current major problems with "meats" on every kind.