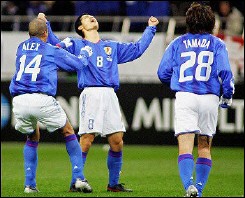 I should be working on my NHK program for tomorrow's broadcast, but it is about Prime Minister Junichirō Koizumi's goal of making Japan an intellectual property-based nation, and tonight I am hoping for another goal! Japan is playing a crucial football game against North Korea, and the Japanese need only a draw to reach their third straight World Cup finals in Germany next year.

Japan defeated Bahrain by 1-0 and reached its third victory in Group B of the Asian Qualifiers second stage. The only goal was scored by the midfielder Mitsuo Ogasawara, at the 34th minute of the first half. That's Ogasawara in the photo, I bet he is looking forward to the game tonight, too!