60 years ago in Hiroshima 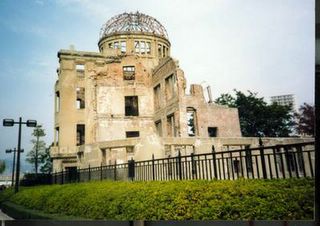 60 years ago, on August 6, 1945, the city of Hiroshima was devastated by the atomic bomb. I was there last year in August, it is a place to visit if you have an opportunity, at least once in your life. Such terrible weapons should indeed be abolished.

According to NHK, fifty-five thousand people attended a ceremony held at the city's Peace Memorial Park on Saturday morning. Tonight NHK is broadcasting a beautiful program live from Hiroshima, with music and interviews, as well as footage from the annual lantern floating festival.

Hiroshima Mayor Tadatoshi Akiba read out the annual Peace Declaration. He called on the public to inherit the commitment of the hibakusha atom-bomb survivors to abolish nuclear weapons and achieve world peace. He called on people to awaken to their individual responsibility and commit themselves to take action for peace.

Prime Minister Junichiro Koizumi said that leading the international community, the Japanese government will do all it can to abolish nuclear weapons so that the tragedy of Hiroshima can never happen again.

BBC has made a video available from today's events in Hiroshima. Click here for a speech by Prime Minister Koizumi.
Peace