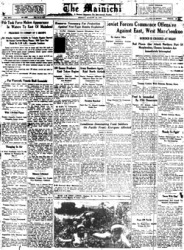 The website of The Mainichi Shimbun has recently been publishing copies of their front pages as they were printed 60 years ago. It is a reminder of the horrors of war, but also of the propaganda and ignorance. This is the front page that carries an article about the atomic bombing of Hiroshima:

"The new-type bombs dropped by enemy planes on Hiroshima on Aug. 6 are, after all, not so powerful as to cause great anxiety, declared Lieut.-Colonel Akatsuka on his arrival in Osaka on Aug. 8 after inspecting the stricken area in Hiroshima."

Did he visit Hiroshima with his eyes closed?

This is a Photo special with vivid images from Nagasaki, the second city to be devastated by an atomic bomb.