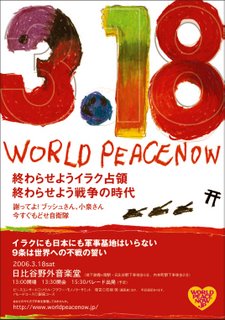 About 2,000 people rallied Saturday in a downtown Tokyo park to mark the third anniversary of the U.S.-led invasion of Iraq and demand that Japanese and other coalition troops pull out, a protest organizer said to AP, in a story I found over at the Mainichi Shinbun:

The rally is one of several planned around the world to condemn the occupation of Iraq, and follows a similar protest of about 500 people who marched through the streets of Sydney, Australia.

About 2,000 demonstrators turned out in Tokyo, carrying signs saying "Stop the Occupation" as they listened to a series of anti-war speeches, said Takeshiko Tsukushi, a member of World Peace Now who helped plan the rally.

The demonstrations continued on Sunday.

The World Peace Now poster is great, with a drawing of three military tanks moving in the direction of a shrine gate that looks just like the one at Yasukuni in Tokyo... The slogans are "Lets finish the war in Iraq" and "Lets finish the era of war", directed to both Mr. Bush and Mr. Koizumi.

JasonSpalding said…
Iraq --- Cold War II --- Back with a vengeance!

The war in Iraq is a critical blunder by State Department of the United States. The U.S.S.R. was before its break up was allied with Iran in its war against Iraq. Iraq at the time had the support of the State Department of the United States. You remember the Axiom the enemy of my enemy is my friend. So when the U.S.S.R. dissolved some in the state department that we no longer had to keep supporting Iraq. So Saddam stopped getting the due he was felt so he tried to conquer Kuwait. This pissed off to many in the world so the U.S.A. and the rest of the world stepped in and sent his soldiers packing back to Iraq. Now when Iraq became has become further destabilized the U.S. had to go in and insure the safety of our worlds needed oil supply. Flash forward till now and what is happening Iran wants to control its nuclear destiny and who is supporting them Russia a former member of the U.S.S.R. club. So the real question is Russia attempting a come back?
2:51 pm, March 26, 2006