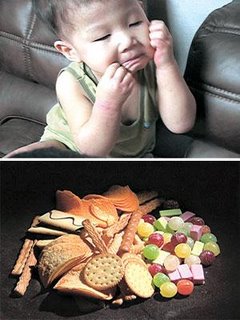 A report in a Korean TV documentary program that cookies, biscuits and snacks are a likely cause of skin disorders among children, is causing an uproar among consumers in South Korea.

"Pursuit 60 Minutes (Chujok Yuksipbun)," a documentary program on KBS 2, reported on March 8 and again tonight, that Korean products such as cookies, biscuits, snacks and chips have ingredients which are linked to the development of atopy dermatitis. Atopy is a skin condition caused by food allergens and environmental pollution.

The program is vividly showing babies suffering from atopy, who cannot sleep at night. A whistle-blower, Mr. Ahn Byoung-su, who previously worked for the snack industry, is revealing all the secrets of how snack companies are hiding the facts from consumers.

Seven Korean snack companies were approaced, but refused to participate in the program. The Asian food industry is indeed fond of MSG, produced by Ajinomoto, known in the US and Europe to cause "Chinese restaurant syndrome" or headaches in adults. Synthetic food colours and preservatives are not safe for young children. Of course babies and young children should not eat ANY foods containing such additives.