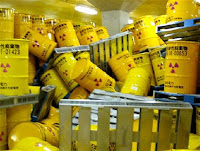 From analysis of the distribution of the after shocks from the 16 July 2007 quake, it is now believed that there is an active fault extending directly under the Kashiwazaki-Kariwa NPP. Since Japan's earthquake resistance guidelines do not permit NPPs to be built directly above active faults, Kashiwazaki-Kariwa would not have been chosen to host a NPP had this been known at the time. However, it now appears that this should have been recognized. After the recent earthquake, Professors Takashi Nakata (Hiroshima Institute of Technology) and Yasuhiro Suzuki (Nagoya University) analyzed the data in TEPCO's license application and concluded that it indicated a fault five times longer than one identified by TEPCO (Asahi Shimbun, 20 July 2007). Between 1979 and 1985, using sonic testing, TEPCO found 4 small faults off the coast of Kashiwazaki-Kariwa, but it concluded that they were either not active or not important. However, Nakata and Suzuki said that the data indicated that three of these small faults were connected and were in fact one long 36-kilometer fault and that the fault was probably active.

Professor Nakata is the geomorphologist who last year proved that there is a previously unidentified active fault near the Shimane nuclear power plant (NIT 114). Earthquake studies for Japan's nuclear power plants have largely ignored the work of geomorphologists. They are taken more seriously now under new earthquake resistance guidelines approved in September 2006, but their role is still vague. It seems that the nuclear industry does not like them, because they are too good at finding active faults.

Times, the UK newspaper, notes that Radioactivity leaked unchecked for three days and teaches us all the Japanese phrase for the combination of an earthquake and nuclear meltdown: Genpatsu-shinsai.

Pandabonium said…
I'm expecting to Gojira to rise up any time now and punish us for this nuclear idiocy.
2:21 pm, July 24, 2007