The making of Japanese national cuisine 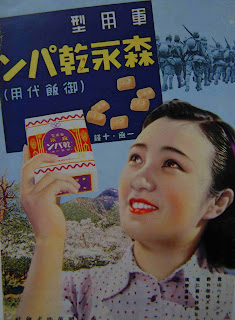 Katarzyna Cwiertka has written a nice article for Japan Focus about War, Empire and the Making of Japanese National Cuisine. She traces many of today's typical Japanese dishes, such as yakiniku and gyoza, to the experiences of millions of Japanese living on the Asian mainland during WW2 and Koreans remaining in Japan in the post war era. Nice photos too: the hopefulness of the Morinaga bread ad from 1937 juxtaposed with vegetable farming in front of the Parliament building in central Tokyo in 1945...

Japanese national cuisine was shaped by a variety of forces that emerged in Japan since the late nineteenth century. However, perhaps surprisingly, militarism stands out as the most powerful. This influence of militarism does not complement the general image of Japanese cuisine, with its strong emphasis on aesthetics of presentation and harmony with nature, and is therefore very little known.

I'm not so sure there is such a thing that can easily be defined as "Japanese national cuisine", but ok, NHK World does its part this summer with a program series called "Your Japanese Kitchen".

Food writer Harumi Kurihara teaches simple dishes with ingredients like daikon (radish) and eggplant. There is also a video about how to cook rice. Rice, of course, is not really an indigenous "Japanese" crop, but was brought here from the continent during the end of the Jomon period (4000-400BC). Kurihara-sensei could do this show alone, but for some reason NHK keeps employing "talents" like Daniel Kahl (who brags on Wikipedia about "his ability to speak in a northern dialect of Japanese". Plus he has appeared in the 1991 movie Godzilla vs. King Ghidorah. Itadakimasu!

Anyway, do have a look around the NHK World food website!