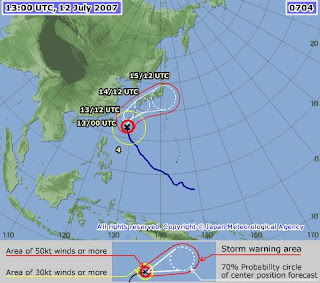 Japan Meteorological Agency has a good page with typhoon data. I will be moving on Saturday July 14, so obviously I'm not too thrilled. They also have daily temperatures and UV warnings. At least I will be safe from that!

To put things in perspectrive: Yes, it rains a lot. And there is strong wind. And I have to change t-shirts about five times a day. Doing laundry? Hahaha. Nice, but nothing gets really dry, ever. Anyway, I prefer it to cold. You know minus 20 degrees? No thanks. I prefer this. I don't like it, I just don't mind it.

I once flew into Nagoya International Airport in the middle of a typhoon, in mid August, with Aeroflot. You know the good-old pilots at Aeroflot? Trained on mighty MIGs, that is one thing. I also think they were in some kind of existential orthodox fix, that only Russians can understand. They didn't circle around and prepare for a commercial landing, nice and slow, with "This is your captain speaking" booming from the speakers. Like pilots from other airlines. We had steam coming down from the ceiling, each time they applied the brakes.

I mean, other airlines probably cancelled their Japan-bound flights that entire WEEK. To cut a long story short, the particular typhoon-loving Aeroflot pilot I happened to be flying with, back in 1993, when half of their fleet still sported the Soviet flag - takes a long time to repaint that many airplanes! - he just dived. I still remember how my stomach felt. It was up near my tonsils. And on he went. Down. To Nagoya. We were all getting rather riled up and tell me one thing that is harmonious about modern aviation... Landing is always traumatic. The one instant when you either make it or... So. We landed. Can't remember disembarking or getting my passport stamped. Still working on my stomach. Typhoon on TV, each minute (oh, I'm already in Kyoto, at the Hiraiwa minshoku!) wondering, "did we really land in the middle of THAT?"

Pandabonium said…
Somehow, I like the conservative approach - even if takes longer.

Martin J Frid said…
"There is an art to flying. The knack lies in learning how to throw yourself at the ground and miss."