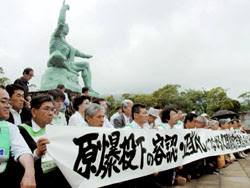 Great, he got the message and quit a few minutes ago. On Saturday Japan's defense minister said the atomic bomb over Nagsaki "couldn't be helped" (shiyou ga nai).

(Photo: Protesters staged a sit-in Monday at Nagasaki Peace Park to denounce Defense Minister Fumio Kyuma's remarks in which he appeared to try to justify the 1945 U.S. atomic bombings.)

Defense Minister Fumio Kyuma, who resigned Tuesday, criticized the United States for the Iraq war, one of a series of gaffes that cast doubt over his fitness to be head of national defense. While the point he wanted to make is understandable, his expression was naive.

His remark on the atomic bombings of Hiroshima and Nagasaki in the final days of World War II was in line with the previous gaffes he had made.

Since the end of the war, Japan has been protected by the U.S. nuclear umbrella under the Japan-U.S. Security Treaty, an agreement that has made it difficult for the government to diplomatically deal with the mass slaughter caused by the United States' atomic bombings as well as the fire bombing of Tokyo during the war, for which historical evaluations have yet to be made.

However, Japan, the only country to have been a victim of an atomic bombing, has a responsibility to continue raising questions about nuclear issues. As such, it is inconceivable Kyuma could state that the atomic bombings of Hiroshima and Nagasaki could not be helped. It also goes without saying that he should resign.

Ouch, and that is from Japan's right wing press. Asahi with its more liberal stance, is much more critical:

...Japan's diplomatic attempt to make the atrocities of Hiroshima and Nagasaki known to the rest of the world has often been criticized by the United States and other Asian nations. These countries say Japan had it coming because Japan started the war. They also argue that the atomic bombs finally brought an end to the brutal war.

There is no easy solution to this dispute. But Japan's position should be that the indiscriminate killings of innocent and defenseless Japanese civilians are still unpardonable, even though Japan started the war and caused huge damage to many other countries.

Describing the atomic bombings simply as something that "could not be helped" is tantamount to forgetting history and subserviently accepting the U.S. justification of the attacks.
Nagasaki