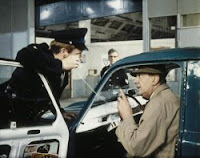 Switzerland has named Toyota's Prius the world's greenest car. Reuters reports that the Swiss government gave the Prius the highest green rating in a draft study evaluating the environmental impact of driving around 6,000 different cars, including carbon dioxide (C02) emissions which contribute to global warming:

The Swiss government said it hopes that the list—which is still in draft form and could be revised before it is finalized next year—will persuade drivers to buy cars which have the lowest impact on the environment.

The list could also be used to impose an emissions-related tax on cars.

'The goal is to modernize the fleet of cars and to make the use of natural resources as efficient as possible, so that using cars will exert less pressure on the environment,' said Adrian Aeschlimann, a spokesman for the Federal Office for the Environment.

The Prius — a hybrid car twinning battery power and a combustion engine — was launched in 1997 by Toyota, the world's biggest car maker. It is the best-selling hybrid car on the road, although hybrids account for only a fraction of global car sales.

I was surprised to read that Fiat's Punto 1.2 Bipower and the Fiat Panda 1.2 Bipower, the Daihatsu Cuore and Citroen's C3 1.4i GNV were also in the top 5 of the draft list. Environmentalists welcomed the Swiss government initiative:'It's great when a national government is behind this, and a list like that will have much more sway and can function as a guideline for the automotive industry,' said Juergen Resch at Germany's environmental group Deutsche Umwelthilfe.
automobiles reduce

Pandabonium said…
I think of the Prius as a filter cigarette. An improvement, but we really need to kick the habit.

Here you've tackled maybe my pet peeve of all time-- car emissions. I ride a bicycle and walk, mostly, and I absolutely hate the smell coming from cars. I can't ride my bicycle for any length of time without getting a headache from the fumes. Because the roads where I live are so narrow there's no escaping breathing them everywhere you go.

I have a few questions that maybe you know the answers to? Do they have emission standards for cars in Japan, and are cars allowed to sit by the side of the road idling their engines? The worst offenders around here are the taxis sitting at the station. They are there for hours sometimes with their engines running all the time and have to walk past them to enter the train station.

P, yes, the Prius is just a wake-up call. Seems sales in the US are going particularly well (hint hint).

Vegetablej, I so agree with you, and I wish we could have a big move for "idling stop" to be more than a slogan. I even had to go out and tell a guy who had his car engine on outside my kitchen window the other day - my entire house was filled with petrol fumes in no time... Any ideas what we can do?
11:19 pm, August 06, 2007

vegetablej said…
Other than the potato (shame to do that to a perfectly innocent vegetable):), I think it's going to take quite a bit of education. One of the main problems, as I see it, is that the people doing it don't see any harm. They don't link idling and other kinds of pollution with rising cancer rates and other debilitating illnesses. It needs some leadership on a national level. This would be a good cause for some politician to pick up, especially if s/he could link it up to disease in children. I see the school children as the most vulnerable because they are walking and riding their bikes near traffic and exhaust constantly.

In Nova Scotia there is a program being led by school children to Stop idling of school buses in their district. With a teacher's help they made videos and TV spots with the kids asking for clean air and got their faces in the media to talk about the problem. And the transportation company that runs the school buses cooperated and put stickers in the buses near the ignitions to remind drivers to shut off their engines and reminders in the bus drivers' pay slips. The program seems to be working and they project saving a stupendous 100,000 dollars a year in gas costs, and several hundred tons of CO2 and other emissions.

I don't know if this gives us any clues as to what we can do here, but I as a teacher have been trying to educate myself and my classes about this and other environmental issues for the past 2 years. We have a topics-based class and this is one of the things we consider. I make copies of news stories, and we discuss the problem and what solutions there might be. I ask them to think of what they, personally, might be able to do. It's a start.
1:58 pm, August 08, 2007