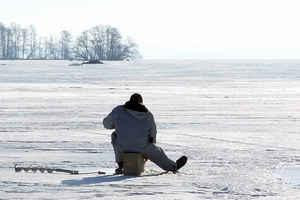 On a cold, sunny day in January, wouldn't you love to go fishing? In Sweden it is called "pimpla" and the image says it all. A lonely, quiet time on a frozen lake. 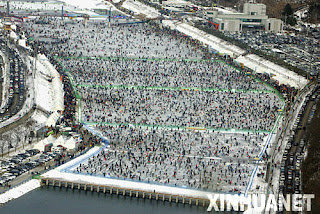 The other photo is from the Hwacheon Sancheoneo Ice Fishing Festival in South Korea.

(From here and here)

But, of course, such images are deceptive. Yes, Asian countries can be very crowded, especially if you come from a part of the world with only 9 million people.

But, in Sweden, we also have sports events with lots of people. Vasaloppet, the annual ski race between Sälen and Mora i Dalarna, attracts thousands of participants.

Living in Asia reminds me that things we take for granted can change very rapidly. The Chinese Vasaloppet has been held in Changchun since 2003, with 6,000 participants in 2004, and more than 10,000 people from 25 countries in 2006. Go figure. 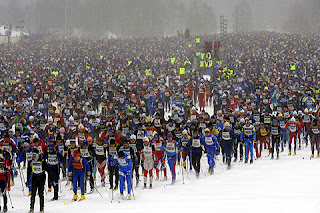 Which photo is from Sweden and which is from China? ;)

And of course, Japan has had its own Vasaloppet in Asahikawa, Hokkaido since 1990. English website here.
China South Korea Sweden Zen

Pandabonium said…
For some reason, lemmings come to mind.