Japan's government has decided that the country's self defence forces should re-join the US-lead war for oil. Except, that is not what they tell voters here. Instead they are going with the "tero" -smokescreen that noone believes in anymore. テロ (Tero) or terrorism is not something most people worry a whole lot about in this markedly safe nation, while high oil prices certainly catch consumers' attention. Of course the two issues are linked. Especially in rural areas, where it is difficult to get by without a car or a truck - and in northern Japan, where kerosen stoves are used to heat houses, schools and offices. Also, Tokyo is now not able to get its electricity from the world's biggest nuclear power plant, Kashiwazaki-Kariwa, which was seriously damaged by the earthquake last year. Instead, TEPCO has to use crude oil and gas.

Most Japanese know next to nothing about the Arab world, or Afghanistan in particular. Neither do most Americans (Some Swedes may remember a time in the late 1960s when people actually drove their cars all the way from the European continent to Kabul!). 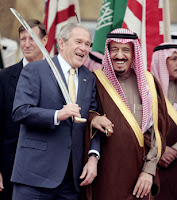 The photo of US president Bush carelessly swinging an Arab sword on his recent visit to Saudi Arabia, where he failed to get the Saudis to increase oil production, speaks for itself.

The US Congress has been notified of six weapons packages to Saudi Arabia, the United Arab Emirates and Kuwait, including Patriot missiles and Joint Direct Attack Munitions -- or "smart bomb" -- technology and related equipment. The deal envisions the transfer of 900 of the precision-guided bomb kits. The total amount of eventual sales as part of the Gulf Security Dialogue is estimated at US$20 billion, according to China Daily.

Meanwhile, Sweden has bypassed legislation that bans sales of weapons to countries involved in war, and accepted export of Swedish weapons, including Bofors weapons systems, to the US, which is currently used in Iraq and Afghanistan, and my dear old neutral home country is even considering sending military troups to the region.

Japan's leaders should at least do something original and tell its citizens why Japan is involved in this unholy war, and not pretend it has any noble motives.

Asahi, in an unusually harsh editorial, noted that the refueling mission legislation has created serious problems for the future of Japan's diplomacy and the SDF. But, the new law does not require Japan's parliament to approve the SDF's actual activities. Under the principle of civilian control of the military, civilian politicians should (note that Asahi says "must") rigorously oversee how SDF troops are deployed, but this is now neglected.

Seiji Ozawa conducting the Berliner Philharmoniker: Sabre Dance by from the ballet Gayaneh, by Aram Khachaturian.

(Thanks Isis for the music clip, it made my day)
Energy Music Peace

Pandabonium said…
Of course the governments know full well what is involved. Bush was there to peddle his weapons (it's the one thing the US excels at exporting) and try, unsuccessfully, to rally his Arab "allies" to gang up on Iran.

Otherwise sane countries like Japan or Sweden are much afraid of getting on the bad side of the US Empire and being left out of future distribution of Middle East resources.

In Japan's case, there is also the LDP's never broken line of succession from the fascists of old, who have a long term dream to do away with Article 9. Refueling and foreign deployments for the phony "war on terror" are merely steps in that direction.
9:31 pm, January 17, 2008

Anonymous said…
You are welcome. Sabre Dance came immediately to mind when I saw that picture of Bush. And like the musicians in a flurry of notes, everyone is scrambling to secure energy resources these days.
9:34 pm, January 17, 2008