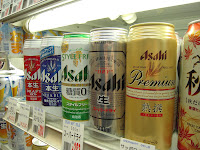 When I was doing the research for my book, Nippon Shoku no anzen ranking 555 (Japan Food Safety Ranking 555) I noticed that many food companies in Japan had very detailed CSR reports and impressive environmental strategies. Several also had clear goals to reduce CO2 emissions, reduce water use, avoid genetically modified organisms, and use more locally procured - and organic ingredients.

It is not always the case that the companies achieve all of their goals, but, if you read their annual Corporate Social Responsibility reports and track their progress, you get a picture of how they get a grip on issues like emissions.

This trend is highlighted by a post over at greenz.jp where Miyagi Koshiro and Ken note that in a survey of 55 Japanese companies, 95% of Companies Have Quantitative GHG Reduction Targets.

Other important points are:
1. Long term vision
2. Goals were for overall operation, not on a per-quantity basis
3. Emissions from production and internal transportation included

Asahi Beer, for example, has been doing quite a lot:

Asahi Breweries, Ltd., a major Japanese brewer, announced on August 25, 2009, the second round of a project that donates a portion of the proceeds from its main product, Asahi Super Dry beer, to prefectures where the sales take place. The donations fund local efforts to preserve the natural environment and cultural heritage sites. This is the second round of this same project which was implemented this past spring, and raised a total of 219,792,528 yen (about U.S.$2.4 million) nationwide.

We can also look in more detail at this particular company, starting with Asahi's CSR page (English):

By 2008, they collected 100.4% of bottles, and by 2007 they collected 92.7% of aluminum cans. That is pretty impressive. However, they still use a lot of energy, including city gas, A-grade heavy oil, and electric power.

Asahi beers are non-GMO but I'm disappointed that they still have not introduced even a single organic beer in the Japanese market: I mentioned organic beer in Japan in this old post about Tokyo's Earth Market from 2007, and Kat & Satoshi noted that:

Made by the Yahho Brewing Company, they have several beers. (Yahho by the way, is what the Japanese yell in the mountains as a kind of yodel, kind of like Yode-lehi-hoo (sorry don't know how to spell it) in other countries.) The organic one is called Shinshu San-San. Shinshu is an area in Nagano prefecture that is known for their soba(buckwheat noodles) and beautiful mountains and san-san (means to shine brilliantly). On the can it is written sun sun (the sun shining brilliantly, get it??). Both the hops and malt are 100% organic from Germany. I was surprised that it was relatively inexpensive. I would have thought since it was organic that it would have been more pricey. I was also surprised that this beer was a little fruity and the foam didn't last too long on top.

In other words, a big company like Asahi can do a lot to reduce greenhouse gas emissions, but there is still room for improvement, and it is still small companies that are spearheading the movement towards sustainable, organically certified products.

Asahi uses (some) solar and wind power, but it is not much compared to their reliance on fossile fuels. I like their forest program in Hiroshima prefecture which was certified by FSC in 2001. Do have a look at the report (pdf) and let me know what you think.

For my book, another important criteria is food miles.

Now, in Copenhagen, Oxfam is proposing that perhaps food mileage is not so bad, but fair miles are more important:

Food is more than a plateful of emissions. It’s a social, political and economic issue that involves millions of small farmers in poor countries who export produce to the North. They have built lives and livelihoods around this trade. By buying what they grow, you’ve clocked up ‘fair miles’.

In any case, rather than Kirin Beer (with imported ingredients) perhaps I ought to try one of the local sake brands, Tenranzan Kahori, made here in Hanno, Saitama:

We were established in 1897, we were at first a small family owned brewery, and we have grown considerably over the decades. We created the Tenranzan brand name to personify our sake. The name 'Tenranzan' means 'The emperor mountain'. It's nearyby from the brewery. Our brewery is located in central Japan's Hanno-city, in the prefecture of Saitama. It's an area blessed with lush and beautiful natural reserves, fine water, two rivers and mountains.