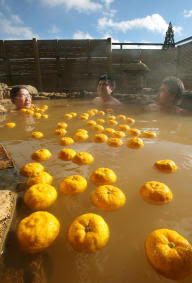 Today is the shortest day of the year, as the planet tilts away from the sun and we have winter solstice here on the northern hemisphere. It is called 冬至 (tōji) and the same kanji are traditionally used in China, Korea and Vietnam as well. More details on wikipedia for Dongzhi Festival. In Korea they serve a special dish with rice dumplings and red azuki beans, on this day. It is called Dongji Patjuk, and Food in Korea has more details:

While making Patjuk as a seasonal food, they put pieces of glutinous rice cake shaped as a bird's egg, which has honey inside. This food also goes on the table for the memorial service and is often thrown into the door as a gesture to drive away misfortunes. On Dongji, each family make Patjuk to eat, and this is made by the process of mashing boiled red-beans or sieving them and making pieces of glutinous rice cake with the water the red-beans boiled in as the amount of bird's eggs would be. This rice cake is called 'Saealsim'. The finished Patjuk is put in the sanctuary first, and after putting it on some corners of the house, the members of the family gather at a place and get to eat it.

Here in Japan, the red azuki beans are popular in all kinds of snacks (including yōkan) with a mild sweet flavour that I like, and a soup called ozensai has o-mochi and azuki beans as the main ingredients.

However, often the products with azuki beans have other artificial flavours as well.

The term "traditional food" should be better respected and protected, and not be used for any kind of item the food industry may want to profit from. 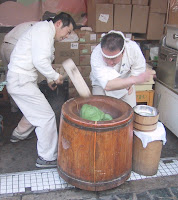 What is o-mochi? Square cakes or balls of glutinous rice, which can symbolize reunion (because they are so sticky?) are called mochi, and it is a fantastic food to make you feel warm around this time of the year. Earlier this month, I was given genmai mochi and kusa mochi, two types that I hadn't tried before. Genmai mochi is made from genmai rice, and has a more rich texture. The kusa mochi contains the pale green herb yomogi, or mugwort (Artemisia princeps).

Mugwort, with its bitter flavour, is the ingredient that gives Swedish bäsk its special punch, and you couldn't make a Dry Martini without Vermouth, which also has mugwort or wormwood for that special hint of absinthe - but I could be wrong.

Kitazawa Seed has a variety of mugwort on sale, noting that it can be used in many dishes for cooks that want something extra: "Young leaves can be boiled, stewed or used fresh, but a little of their strong flavor goes a long way."

Making mochi the traditional way? You need a wooden bowl, preferable very heavy and stable. Place the rice cake inside and start pounding with a wooden club.

Easy? Yes, but it takes two to play. One person swings the club, hitting the rice, as the other (bravely) turns the rice by hand to make the pounding more even, as the gluten needs to be processed vigorously to aquire the right texture.

To make it even better, two people can swing the clubs, and with regular shouts, everyone will do their best to follow the rythm, to avoid injury.

I like slow food, but making mochi the traditional way sometimes requires a lot of speed!

But as I searched for images of 冬至 for this post, google gave me a lot of hits for something completely different. It turns out many people associate winter solstice in Japan with taking a hot bath, and adding lots of yuzu, the aromatic citrus fruit, to the waters. As I write this post, it has already gotten dark outside...

(Images of yuzu bath from Tateshina Park Hotel and Kahoku) 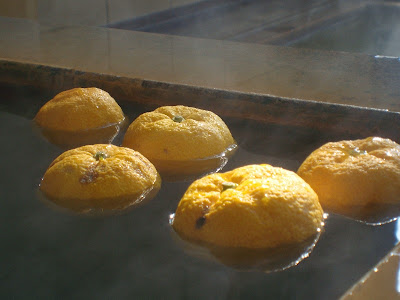 Pandabonium said…
I used to pound mochi on Maui. We used a stone bowl and guava wood mallets. It was always a gathering a several families, so there was a lot of rice to pound. I've never seen it done as fast as in the video clip. Scary enough when it is being turned at a regular pace.

It would usually rain and there would be ozoni served later. Wonderful.
Happy New Year.
8:03 pm, December 22, 2009

K and S said…
Same here, we would pound mochi on Oahu too. We also gathered with many families to make the mochi and each of us got a chance at pounding the mochi. The adults would tell us to pound the mochi at least once for good luck.

My own personal experience of this activity was at a festival we came across while driving along the Noto-Hanto coast one Golden Week. Town was having a festival so we stopped off - one just has to in Nihon, ne. The sudden appearance of foreigners and opportunities that arise etc. Not easy to maintain some sort of co-hesive rythm! A great 'totsuzen' afternoon!

TenThousandThings said…
Thanks for this wonderful post on Winter Solstice.

I took a sauna bath, then hot bath with mikan (no yuzu in N. America that I know of) all evening -- I had no idea that this is a Japanese practice -- it just seems like a fantastic way to enjoy the dark and cold day

I loved your link to "Food in Korea."

Martin J Frid said…
Thanks for the comment, everyone got such great stories. Take care and have a Good Yule!
2:43 pm, December 24, 2009

Gabi Greve said…
Thanks for the great information, Martin san !

I work on a Darumapedia ... Japanese culture via Food, Haiku and Daruma san !

Mary Witzl said…
I used to love those yuzu onsen!

My kids waited breathlessly every year for mochi-tsuki. They loved everything about it: taking their turn at whacking the rice, eating warm with sticky-sweet adzuki paste, drinking hot tea with it. I'm not all that crazy about mochi myself, but after we left Japan, I strongly considered trying to make it in my bread machine, just to please my kids. But it wouldn't have been the same.
5:51 pm, January 01, 2010