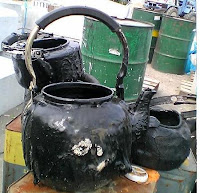 This is just such a great case of the pot calling the kettle black. But, ok, per capita we are doing much better here in Japan than in the old US of A.

I like Mr. Ozawa's attitude. How things have indeed changed.

Japan's Environment Minister Sakihito Ozawa has indicated that the US midterm target for reducing its greenhouse gas emissions is not enough.

Speaking to reporters after a Cabinet meeting on Tuesday, Ozawa called the target somewhat disappointing, but expressed a measure of appreciation for the US long-term target.

US President Barack Obama is expected to officially announce the targets at a UN climate change conference opening in Copenhagen next week. The meeting is known as the 15th Conference of the Parties to the UN Framework Convention on Climate Change, or COP15. 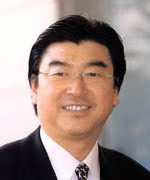 Developing countries are likely to exert more pressure on industrialized countries, including the United States, to raise their targets further.

Too bad the US of A doesn't even have a Secretary of the Environment, or someone in charge to make policy about environmental matters.

(This article first appeared on NHK World, the official website of Japan's public broadcaster - much like the BBC - and I copy the news story as it is likely to soon disappear from their archives. I think the public has a right to know what happens in Japan, and I hope NHK will review its policy to not maintain a searchable archive of news in English. I believe this constitutes a 'fair use' of any such copyrighted material as provided for in section 107 of the US Copyright Law. In accordance with Title 17 U.S.C. Section 107, the material on this site is distributed without profit to those who have expressed a prior interest in receiving the included information for research and educational purposes. The photo is mine, an image I took in Yono, Saitama at a construction site. I have no idea what they where brewing in that kettle, but it does give me the creeps. Isn't it a great image? Please save and use it if you wish.)
Climate change