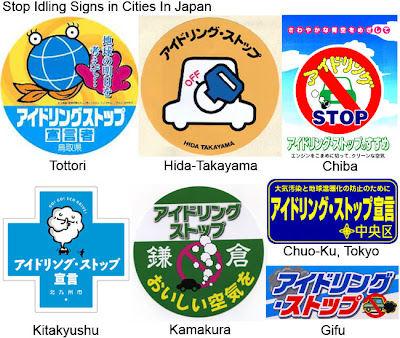 Wasting fossile fuels seems like an increasingly important issue to tackle. I have mentioned how much I dislike drivers who leave their car engines on, while they do other things, including shopping or sleeping. It is a common practice in Japan, even though it is technically illegal in many places. Even large trucks and tour buses just park and keep idling, apparently unaware of the air pollution and noise. Kids especially are at risk and allergies are on the increase. The fact that we are running out of oil on this fragile planet also seems to not bother these drivers, and they need to understand how their ignorance is contributing to climate change.
I often take the local bus in Tokyo, and many bus drivers turn off the engine as they stop at red lights. I have noticed that many transportation companies also encourage their drivers to stop the engine when unloading goods. My postman sometimes stops his Cub bike when he has a lot of letters to deliver, but Japan Post doesn't seem to have any rules or recommendations about this issue.
(Image of "idling-stop" signs from Lets Japan)
I did a quick search and foud some organizations that are trying to address this problem:
1) EICAS (Environmental Imrovement Conference of Automotive Society)
This is an industry-led group of car makers, that focus on "eco-drive"educational campaigns (including teaching drivers how to stop idling) for the "safety of people, mothers and children."
http://kurumashakainokankyou.jp/index.html
2) Kuruma Shakai (NGO)
This is a group of ordinary people and parents who are worried about pollution issues and promoting a safe pedestrian society, especially for children. They also promote public transportation rather than car ownership.
http://toinaosu.org/
3) Society for Electric Vehicles
Group that promotes non-polluting EVs and safe transportation.
http://www.areev.org/index.htm
4) JCCA (The Energy Conservation Center, Japan)
This is an association that started a nation-wide campaign against idling several years ago. They promote installation of a device from MK Japan called ITS-1200 to help drivers. Their campaign is called Smart Drive, which they also aim to introduce in other Asian countries. They also do events together with Toyota and Nissan, with ambassadors who train drivers around Japan...
http://www.eccj.or.jp/ambassador/eng/27/1/1_5.html (in English)

Idling stop is to stop an engine of a car at the time of a stop. In fact,
this is very effective means to reduce fuel consumption. When you do wait with
somebody, or when you do loading and unloading of a load from a car, energy
saving effects increase if you stop an engine at one time while just several
minutes. For example, it can save about 140cc gasoline when you stop idling for
10 minutes on 1st. Then you profit for about 51L, around 5,000 yen between one
year. Please try it, everybody. Now IDLING STOP is done mainly on a route bus or
home delivery. In addition, interest rises in self-governing communities of the
whole country. For example, in Kitamoto-shi of Saitama, they carried out IDLING
STOP with the acquisition of ISO 14001, quantity of their gasoline use reduced
7.7% from the last year. In Hyogo, as the regulations that a prefecture related
to environmental maintenance and creation, they obliged it to IDLING STOP at the
time of parking for all drivers. And they inflict a fine of 100,000 yen on a
violator. Some car companies develop the car which carried the device which can
easily do an idling stop and commercialize it.

Unknown said…
Actually, I agree on your sentiments. The big problem is some people really don't think on what will others think or feel. In short, they are less considerate. It just that Japanese cars are quite fuel economy that's why it doesn't matter if these people leave their engine on while doing something..
5:53 pm, January 08, 2013