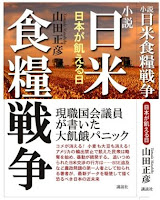 Masahiko Yamada, DPJ lawmaker and author of a novel about how serious things could get if there is a global food crisis, was appointed Agriculture Minister today. He has previously served as a senior vice minister of agriculture, forestry and fisheries.

The 300 page novel is a work of fiction with a number of reference points to real events over the past few years. What if grain trading in Chicago goes seriously wrong and Japan's trading companies cannot secure the wheat and corn that Japan needs to feed its population? Would "Heisei riots" follow, with people trying to escape from the cities? Yamada imagines panic and terror attacks and even starvation.

Clearly, what Yamada describes is a worst case scenario that few Japanese people want to think about - but the prospect of a "food war" is something the government should have long-term planning for. An oil crisis in the Middle East could very rapidly develop into a major problem for Japan, with everyone from fishermen to rice farmers completely at loss what to do if gasoline for boats and farm equipment was not easily available.

Yamada has in the past been critical of the previous LDP-led governments' ways of handling other crises, such as genetically modified food and the BSE issue. He has tried to bill himself as someone who has made food safety his "life work" and written about Chinese factory-made food as a threat. In 2006, he spoke out against the Free Trade Agreement negotiations with Australia. In interviews, he explains how important he thinks it is for people to think about a day when Japan may starve. It will be interesting to see how he handles such issues at the helm of a notoriously difficult ministry...

He will also be in charge of the UN conference on biological diversity in Nagoya in October 2010 together with Environment Minister Sakihito Ozawa, who stays on since the Hatoyama administration. Seiji Maehara will be Land, Infrastructure, Transport and Tourism Minister, also in charge of Okinawa and Northern Territories. Satoshi Arai will be National Policy, Consumer and Food Safety Minister, another post that I am very interested in, in connection with my work.