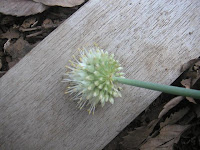 My veggie farming skills are slowly improving, mostly due to others who are patiently explaining what to do.

This year, I have been helping a local farmer who runs a pretty professional operation with several houses, sprinkler systems, and all the bells and whistles he needs to provide supermarkets with fresh produce, including tomatoes, potatoes, daikon, onions, leech, beans, eggplants, red peppers, asparagus, corn (maize) and more. He is quite amazing and I will blog about him another time, because it really is fun to help out on a "real" farm, rather than having to make all the mistakes on my own.

Meanwhile, my own small veggy patch has been surprisingly good so far this year. I have harvested daikon and leek onions, and just a couple of days ago the first cucumber of the year. I also had some really nice beans from plants I bought in December. Right now I'm waiting for the tomatoes to start ripen, and I have some eggplant as well to look forward too, in addition to the up-and-coming cucumbers.

But the most fun is learning new skills. I just noticed the other day that my leek onions were bearing seed, so I took a couple of photos before planting them. I had left them on purpose to see if I could get seeds from them. The small black seeds are easy to catch from the dried "bulbs" that you can see an example of in the photos. Farmers joke that they look like the shaven heads of Buddhist monks... I planted some of the seeds, hoping to get them to sprout, and if all goes well, I will have figured out how to grow my own leek onions in a "sustainable" way. If I am less lucky, they will be F1 hybrids, which won't breed true, meaning the good traits that the seed company was aiming for with this particular variety will not carry over to the next generation. I don't think they are F1 hybrids, but I can't remember. I really should take more notes!
farming Food sustainability