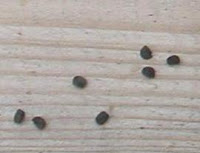 In the first part I dealt with the way we can save seeds from plants, by carefully paying attention to what happens during their entire cycle. In this part, I want to talk about saving seed - from seed companies. And I mean that in the literal sense: we need to understand the way the seed companies control farmers, and thus how they control what we eat.

If you want seed for your garden, and you buy what is available in the usual garden shop, you basically support the large, multinational seed companies.

Saving (as in "rescue" or just avoiding) seed from the companies that try to genetically manipulate (and patent) is a first crucial step. I have also previously talked about F1 hybrids, that do not breed true. F1 hybrids are not GMOs, but if you try to save seed from F1 hybrids, you don't know what the outcome will be in the following generations (technically speaking, the F1 seeds come from "inbred" lines of parent plants). The reason seed companies spend so much on GMOs and F1 hybrids is obvious: this is how they make money.

Here are 3 good reasons from wikipedia why F1 hybrids are not so great for biological diversity:

Small seed companies that focus on a larger variety of natural seeds from heirloom vegetables are facing an uphill battle to reach consumers. Here in Japan, I have previously mentioned two small seed companies, if you want to support organic agriculture and biological diversity:

But for most farmers here, the go-to seed company will be either Sakata or Takii. As you can see from their websites, both Sakata and Takii have a long history and are generally highly regarded by farmers. These are huge operations with large sales departments. Since there is no commercial farming of GMOs in Japan, they don't do GMOs, like many of the other top seed companies on the global market, especially Monsanto. Sakata was in the news recently for its plans to sell more F1 hybrids in India:

Sakata Seed Corp. is betting that rising demand for its disease-resistant hybrid "F1" seeds will help the company triple its market share in India. The seed wholesaler accounts for about 1 percent to 3 percent of the F1 and "open pollinated" vegetable seed market in India, and plans to increase it to 10 percent by 2018, according to Chief Executive Officer Hiroshi Sakata. That would place the company in the top five vegetable seed wholesalers in India.

By moving farmers away from traditional seed saving pratices, seed companies can profit. Sounds simple but it has huge implications for food security and food sovereignty. This can be very risky as more of a country's food supply will become reliant on imported seeds, and trade flows based on monetary exchange rather than sharing seeds as is traditionally the case. It can also have a huge influence on the diet in regions of the world where people have managed well on local foods.

This is data from a report by ETC Group, called Who Owns Nature?