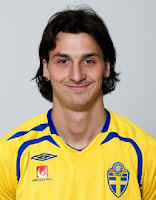 As most of my long-suffering Kurashi readers know, I'm from Malmö, a harbour city in the south of Sweden, that used to be a part of Denmark way back some 400 years ago before we all decided enough is enough, let us all get along... Well, we dealt with that. In Malmö, we are closer to Copenhagen than to Stockholm in some ways. There may be a lesson here for prefectures in Japan that are further west, near Korea and China...

Funny how a single Swedish football player, Zlatan Ibrahimovic, who went to the same elementary school, Rosengårdsskolan as my younger brother Johan and I, now define Sweden. Here is what happened in the last couple of days. Zlatan, who has scored for and won all kinds of honours in Europe for all kinds of great clubs, including Paris, Inter, Milan, you name it... He started out in a small local Rosengård team called Assyriska, where not a single player had Swedish nationality, and was later playing for MFF, the main club in Malmö.

Fast forward, and this incredibly talented geezer has now single-handedly brought down England in the friendly that ended 4-2. Believe it or not, Zlatan scored all 4 goals. He is that good.

Cue applauds and even here in Japan, as I had supper tonight at Kyoto Dining Ichiba Coji, at the 9th floor of the Kyoto station building, when I was asked where I was from, and I said Sweden, the young guy with a cute girl on a date did not miss a beat. "Ibrahimovic!" was the immediate response. ズラタン・イブラヒモビッチ

Some 10 or 20 years ago, I may have expected "ABBA" or "Volvo" or "Björn Borg" but in November, 2012, a certain MFF center from Malmö is now known around the world, with instant recognition here, in Kyoto, Japan.

Tom O said…
I don't, erm, know what it is but there is something about this post I don't seem to like!! Obv, being from London, it can't in anyway be the, um, result...
Believe or not ALL the talk here the day after and more was about THAT amazing goal. Ok, some people are saying that the goalkeeper should have done a better job with the head but to instantly execute that brilliant bicycle kick AND from that angle - brilliance. Of course I was at the Arsenal v Barca CL game where same said ZI scored twice - ya can't keep a good man down!!
My first direct contact with Swedish football per se was the Arsenal v IFK Gothenburg Cup Winners Cup game back in 1979. IFK were managed by some chap called Sven Goran Ericsson...
1:19 am, November 18, 2012

Johntaro said…
I just don't think Ibrahimovic is in the same league as ABBA. When I think of Sweden, I always think of ABBA - and of course, surströmming (but not necessarily in that order).
10:11 am, November 19, 2012