How To Stop A Road That Will Destroy Your Local Park? 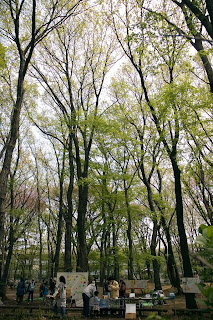 Kodaira, western Tokyo, is one of those towns that need more greenery, not less. It also has plenty of train lines to connect, as well as buses. And don't think there are no roads for cars, already...

I was approached by some people with great concern for their local park, the Central Park of Kodaira, it is just next to a couple of universities and colleges, clearly a green lung with a lot of support from the local community. They have several NGOs bringing kids in, such as the Donburi no Kai (Acorn Group) to teach values of nature. Now that entire park may be destroyed by the construction of a road initially planned back just before the Tokyo Olympics in 1964... Talk about irony as Tokyo is once again trying to get the Olympics for 2020...

If you live in the area, time to do something. Join the groups and NGOs that protest this useless "development" and get Tokyo to move away from cars that pollute and cause climate change. We know better. We ought to know better.

But there is more to this story. 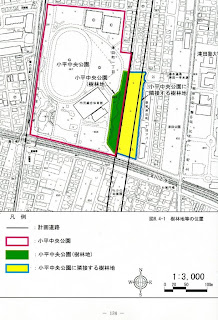 The Japan Times had this great article by Chris Burgess at Kodaira College:

On Sunday, May 26, something quite remarkable happened in Kodaira city, western Tokyo: Over 50,000 citizens voted in Tokyo’s very first local referendum (jūmin tōhyō) on the issue of whether a 50-year-old plan to construct a road should be reviewed or not.
Unfortunately, the ballot papers will never be opened — 90 days on, the votes will be discarded, and with them the opinions of 51,010 Kodaira citizens. And so will end an extraordinary story of grass-roots democracy, public works spending and political obstruction.
The story starts some 50 years ago, against the background of a booming population and economy. In 1963, the Tokyo metropolitan government put forward a plan for a four-lane, 1.4 km road, part of a 13.6 km stretch linking Fuchu and Higashimurayama. This road was to run through Kodaira Chuo Park, bisecting the historical Tamagawa Aqueduct (Tamagawa Jōsui) and the Green Road, a popular 21 km circular walking path.
Soon after, the plan dropped off the political radar. But 18 years ago it was revived. Aside from the economic benefits arising from transport improvements, emphasis was also put on its role in times of disaster. The revived plan was to cost ¥250 billion — most of which would be used to compensate the 220 households who were to be evicted. Almost half of 1.3 hectares of woodland was scheduled to be cleared and 481 trees chopped down.
The revival of the old plan prompted a number of local groups to band together and form a coalition — Kodaira-toshi Keikaku-Doro ni Jumin no Ishi o Han’ei Saseru Kai — asking for citizens’ wishes to be reflected in the decision-making process.

Photo and map from the Donburi no Kai website.

Tom O said…
Doesn't a road, aleit a 'normal' one, split this park in two already? Btw, it should be known that a certain Hayao Miyazaki is a resident of Kodaira and this particular issue (if it isn't already) would be right up his street - pun not intended!
11:16 pm, July 04, 2013

Martin J Frid said…
Well, as the 36 m road will go north to south, it kind of tweaks the eastern boundary of the park, not exactly splitting it in two. But a lot of the wilderness that is now there, especially near the river section to the south-eastern part, would be a complete loss. No bridge solution in sight either, just a massive road.

I have two different answers that could work independently of each-other, but probably better as a unit:

1. I think it comes down to two different but inseparable things. (I) Who cares? and (II) Money talks.

It'll have to be fought on many fronts by people, lawyers, activists, local school faculty members and students, and eventually the politicians.

So, instead of one group resisting, somebody needs to establish a foundation that collaborates various peoples in their respective fields, all of whom can hack at the root of the problem from different angles.

See Concrete dragons: How to slay a freeway in Seattle, Washington

If 1 fails outright, there has to be enough people of said foundation who will physically block the development for as long as it takes to stop it. It's that simple.

Martin J Frid said…
Thanks for the comments :) Well maybe a combination of 1 and 2 (with the possible addition of Hayao Miyazaki magic) would do the trick.

If all fails, it could still be very valuable lessons learnt for all involved, to be applied in the future.

Tom O said…
"This is just south of Higashi Murayama, a place you are familiar with..."

Indeed, walked through the area quite a lot to get to a Chuo line eki. Never saw Miyazaki-san tho!

Martin J Frid said…
Tom, it i a busy area already as it is, as you know. How about they delay (...) the construction of that particular road section, and see what happens in the next 20 years. Is that 4 lane highway needed or not, in the long term? Not just talking about the Kodaira Central Park, but more substantially? Over 50,000 people voted no to this in May. Similar issue in Shimokitazawa.

If the root cause is not that we could all use more bicycles, rather than cars, then maybe they need to promote a more profound solution, or a solution based on more profound thinking. I sense they have not provided such a model. Or, if the sorrow is too much to bear, move out and find a better place to put down your roots, for a better living (Kurashi).
1:19 am, July 07, 2013

Tom O said…
If I am not mistaken not too far from Kodaira is a large highway that goes from Higashi-Murayama thru to Shinjuku. The two words 'vested interests' seems to come to mind, who is going to make moolah out of this (as usual).

And as you say, there is always the 'option' to move the other way INTO the 'inaka' for that quality of life and silence.

Pandabonium said…
Growing up in the San Fernando Valley of southern California, I saw this kind of destruction all too often as rolling hills of oaks farms of orange groves made way for housing and roads. One of the worst of those memories was a split highway that was lined by ancient oaks became scheduled for widening to accommodate more automobiles and so miles of of trees came down. I learned to hate such development starting from then.

Martin J Frid said…
Key word may be that the kids now learn to HATE this kind of "development" and if this is a loss, the larger win is that we can educate a new generation.
2:04 am, July 13, 2013